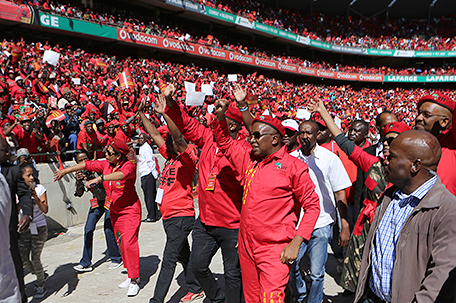 ABOVE PHOTO:  Economic Freedom Fighters (EFF) party leader, Julius Malema, foreground, second from right, greets supporters on his arrival at the launch of their municipal election manifesto in Soweto, Saturday, April 30, 2016. Fiery South African opposition politician Malema told 40,000 cheering supporters that President Jacob Zuma should step down before the army turns on him because of the corruption allegations against him.  (AP Photo/Denis Farrell)

JOHANNESBURG — A South African opposition leader on Monday threatened the country’s White minority in a speech reflecting frustration among many in the Black majority over a perceived lack of economic benefits since the end of apartheid.

Julius Malema, leader of the Economic Freedom Fighters party, made the remarks outside a courthouse where he faces charges connected to his alleged calls to supporters to occupy land owned by Whites, who retain considerable economic clout in South Africa 22 years after the end of White minority rule.

European colonizers “found peaceful Africans here. They killed them. They slaughtered them like animals,” Malema said. “We are not calling for the slaughtering of White people – at least for now. What we are calling for is for peaceful occupation of the land.”

To cheering supporters, Malema said: “I’m here to disturb the White man’s peace. The White man has been comfortable for too long.”

The Economic Freedom Fighters party, which says land must be redistributed to poor Blacks to get rid of the legacy of apartheid, won about eight percent of the nationwide vote in municipal elections in August. The Democratic Alliance– a larger, more moderate opposition party that made big gains in those elections– condemned Malema’s remarks about White people.

“This violent and threatening language has no place in our constitutional democracy,” the Democratic Alliance said in a statement. “Hate and violence only detracts from this vision and tears apart the dream Nelson Mandela had for our beautiful country in 1994.”

Both opposition parties are harsh critics of South African President Jacob Zuma, who is enmeshed in a series of scandals, most recently over allegations that a wealthy business family with close links to the president sought to influence the selection of some Cabinet ministers. Malema has accused parliament, which is dominated by the ruling African National Congress party, of undermining the constitution by failing to penalize Zuma because of a scandal over state spending on his private home.

Malema’s calls for Whites to be ejected from land resonate with some South Africans even though they are more radical than the approach of Mandela, the former prisoner under apartheid and ANC leader who sought reconciliation with the White minority during the delicate transition from apartheid to democracy.

The demands of the Economic Freedom Fighters leader instead seem more in line with events in neighboring Zimbabwe, where the land of many White farmers was turned over to blacks in a sometimes violent program that started around 2000. The land seizures were blamed for contributing to Zimbabwe’s economic turmoil.

Malema, a former ANC member who feuded with the party’s leadership, is being charged under an apartheid-era law that bans gatherings seen to be a threat to public order. His lawyers plan to argue that the law, used decades ago against Mandela, violates South Africa’s post-apartheid constitution. The case against Malema in a court in KwaZulu-Natal province has been postponed to Dec. 7.