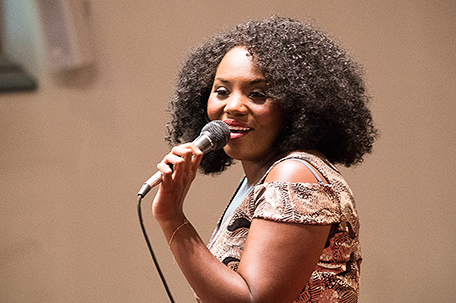 ABOVE PHOTO:  Lindsay Roberts entertains the audience with a flawless performance.

On Saturday, October 21, 2017, songstress Lindsay Roberts beautifully performed “Let Her Spirit Sing,” as she interpreted the theme of the Opera North concert held at Christ Church and St. Michael’s Episcopal Church located at Tulpehocken and McCallum Streets in Germantown.

Opera North, Inc. (ONI) which,  is the oldest African-American opera company in the Philadelphia and Montgomery County region is celebrating its 41st season this year.  At the concert, ONI also honored one of its founders, KYW’s award- winning journalist, the late Malcolm Poindexter.  In the future, an award will be given in his honor for outstanding dedication and service. 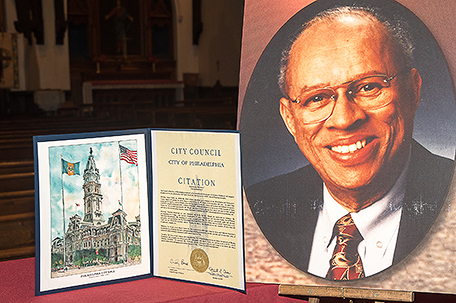 This citation was presented to the family of Malcolm Poindexter by the Phila. City Council.

Lindsay Roberts, a soprano from Philadelphia, has performed in five national tours, numerous regional theater productions and made her Broadway National Tour in the Tony award winning musical, “Memphis.”  Recently, Lindsay had a principal role in the play, “Ragtime” in Honolulu.  Lindsay is as they say,  “The total package.”  Besides having a melodious voice, a winning personality, and an adorable, sweet presence, her performing skills are exceptional and professional.

This event was a collaborative effort from the board of directors of ONI which, include the executive director Leslie Burrs, president, Patrick Delaney and vice president/ event chair, Coralie Barksdale.  Over 200 guests were in attendance and many stayed for the reception afterwards to meet Lindsay.

Funds from this event will help ONI advance its educational and cultural initiatives that serve students in school districts and seniors; through it’s community engagement programs. ONI’s annul programming includes, “Opera in The Schools, “ “Opera for Seniors” and other dynamic musical offerings.