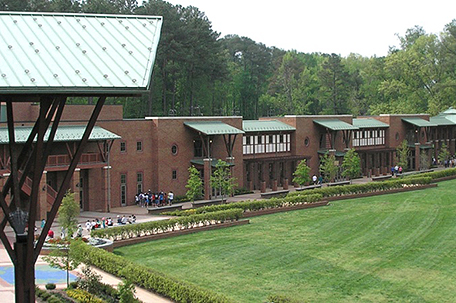 “He brought not any thing but 20 and odd Negroes, which the Governor and Cape Marchant bought for victualls (whereof he was in greate need as he pretended) at the best and easyest rates they could.”  –John Rolfe, 1619

On May 13, 1607 three ships sailed along the James River in what is now Virginia, and anchored at a site they named in honor of King James I. The 104 men were part of an English expedition underwritten by the Virginia Company of London to generate profits from New World industries. Captain Christopher Newport and the colonists chose the site because of deep-water access and its ability to be defended. The Jamestown Settlement would become the first permanent English colony in America and would plant the seeds for events that would alter the course of every aspect of world history. http://wwwAmericashistorictriangle.com

The colony struggled from the outset. It was situated on a portion of Paramount Chief Powhatan’s realm of 14,000 natives, Werowocomoco, and although trade was established, relations soon suffered. In May1608, Captain John Smith became the leader. He established a strict rule, “work or starve,” and made it mandatory for each settler to farm four hours daily. Smith returned to England in 1609 after sustaining an injury and never came back.

Things were rapidly deteriorating and grew worse when a boat filled with new colonists and fresh supplies wrecked near Bermuda. The winter of 1609 saw depleted food supplies and is referred to as the “starving time.” Colonists, now numbering 240, starved at a shocking rate and archeological studies and eyewitness accounts have pointed to cannibalism. Only 64 settlers remained when more colonists arrived in May of 1610. 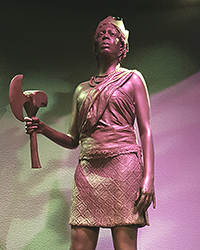 In October of 1608, Mistress Forrest and her servant, Ann, became the first women in Jamestown.  Ann wed shortly after her arrival, and hers was the first wedding ceremony in the colony. A trickle of women arrived until 1620, when 90 women were sent to serve as wives and servants, followed by 57 women two years later.

Arguably the most significant arrival in Jamestown was that of the White Lion and the Treasurer, ships manned by privateers carrying human captives in August of 1619. The Africans on board were most likely captured in the Ndongo kingdom in Angola and marched for 200 miles to Luanda’s port. More than 300 newly enslaved Africans were loaded aboard the Portuguese ship São João Bautista and set sail for Vera Cruz. The Bautista was attacked in the Gulf of Campeche, relieved of some of its cargo, and sailed to Point Comfort where the people were traded for food. There is still some question whether they were considered slave or indentures but they are widely considered the first documented slaves in the New World although their arrival preceded legislation establishing the institution. By 1649, there were 300 documented Africans in the colony. No matter what their legal status, this event is widely regarded as a forerunner of the lucrative slave trade that would follow.

Jamestown was Virginia’s capital until it relocated to Williamsburg in 1699. The move was made because the State House was burned twice and Williamsburg offered greater safety because it was further inland.

Jamestown Settlement is a 46-acre living history museum complex that immerses visitors in the world of 17th-century Jamestown as seen through the eyes of the three cultures, Native American, English and West Central African, which intersected there. All strata of society are represented and emphasis is placed on comparing and contrasting the societies in the important areas of economy, family structure, foods, government, labor and language. 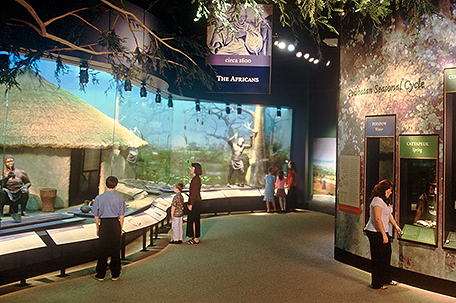 he galleries are currently undergoing an extensive $2-million restoration, in anticipation of the 2019 Commemoration marking the 400th anniversary of the first women, the arrival of the Africans and representative assembly in English America. (www.historyisfun.org)

Visitors begin inside the museum with a film, “1607: A Nation Takes Root,” and then follow a self-guided, chronological trail, through the three primary galleries. The first two sections are “The Crossing” and “From Africa to Virginia.” The final area features full-scale replicas of the domiciles of Indians, planters and slaves. The museum exhibits more than 500 artifacts, videos, dioramas and life-sized sculptures of Powhatan and Angola’s warrior Queen Nzinga.

Pocahontas, Chief Powhatan’s daughter, was one of earliest figures in American history to attain mythic status. On July 15th, the exhibit “Pocahontas Imagined,” will premiere 400-years after her death. This special exhibit will explore the truth and the stories behind the legends as well as display artifacts that interpret how she has been depicted in popular culture. She served as a bridge between cultures, was baptized as Rebecca and wed John Rolfe. They wed in 1614, the same year he shipped a tobacco sample to England. The couple traveled to England where she died and was interred in Gravesend. Her gravesite was lost in the World War II bombings. 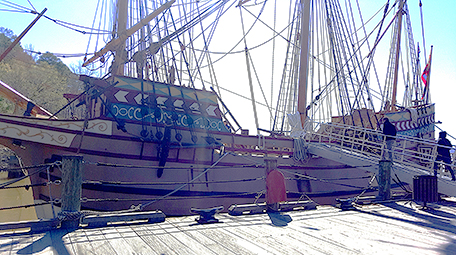 he exterior complex consists of three parts, a Powhatan Indian village, replicas of the three 1607 ships, Susan Constant, Godspeed and Discovery and the palisaded Jamestown fort. Visitors can climb aboard the ships and imagine the 4.5-month journey, participate in village activities and walk into the wattle and daub structures inside the triangular fort.  Interpreters in each area bring the fort to life and are available to demonstrate and teach 17th-century skills.

The gift shop is an extension of the experience and offers site-related gifts, books, toys and reproductions. A minimum of three-hours is needed for a visit. The Jamestown Settlement Café has a comprehensive menu that is both affordable and tasty.

Virginia is definitely for lovers of history. https://www.virginia.org