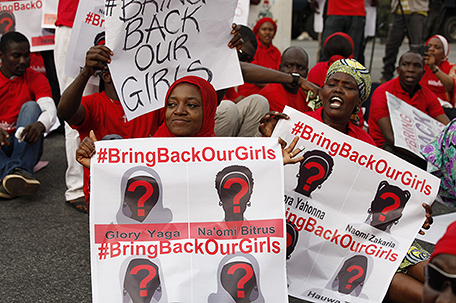 ABOVE PHOTO:  People attend a demonstration calling on the government to rescue the kidnapped girls of the government secondary school in Chibok, in Abuja, Nigeria, Thursday, May 22, 2014. Scores of protesters chanting “Bring Back Our Girls” marched in the Nigerian capital Thursday as many schools across the country closed to protest the abductions of more than 300 schoolgirls by Boko Haram, the government’s failure to rescue them and the killings of scores of teachers by Islamic extremists in recent years.  (AP Photo/Sunday Alamba)

MAIDUGURI, Nigeria — Extremists have abducted 60 more girls and women and 31 boys in weekend attacks on villages in northeast Nigeria, witnesses said Tuesday, another sign of the Nigerian military’s failure to curb an Islamic uprising.

Some married women were taken along with their children who range in age from three to 15, said witnesses.

A local official confirmed the abductions but security forces denied them. Nigeria’s government and military have been widely criticized for their slow response to the abductions of more than 200 schoolgirls kidnapped April 15.

There was no way to safely and independently confirm the report from Kummabza, 150 kilometers (95 miles) from Maiduguri, capital of Borno state and headquarters of a military state of emergency that has failed to curtail near-daily attacks by Boko Haram fighters.

Kummabza resident Aji Khalil said Tuesday the abductions took place Saturday in an attack in which four villagers were killed. Khalil is a member of one of the vigilante groups that have had some success in repelling Boko Haram attacks with primitive weapons.

A senior councilor from the village’s Damboa local government told The Associated Press that abductions had occurred but insisted on anonymity because he was not authorized to give information to reporters. He said elderly survivors of the attack had walked some 25 kilometers (15 miles) to the relative safety of other villages.

The new kidnappings show that international efforts to coordinate security along Nigeria’s border with Cameroon have stalled, said Jacob Zenn, author of a book about Boko Haram. Sightings of groups of girls assumed to be among those kidnapped in April have come in from the neighboring countries of Chad, Niger and Cameroon, he said. Boko Haram’s kidnapping experts appear to have set up headquarters in Cameroon, he said.

“This latest kidnapping highlights the continued need for the Nigerian military, its neighbors and the international community to prevent Boko Haram from taking advantage of the border region,” Zenn, an analyst for the Jamestown Foundation, said in a telephone interview.

Asked about the Nigerian government reaction, he said “It does seem like the government is overwhelmed because Boko Haram is showing that it is not only capable of dominating the border region but also carrying out major attacks in northern cities in Nigeria.”

A strategy to rescue the girls appears to have reached an impasse. Nigeria’s military has said it knows where they are but fears their abductors would kill them if military action is taken. Boko Haram has been demanding the release of detained members in exchange for its hostages but President Goodluck Jonathan has said he will not consider a swap.

Zenn said the longer the negotiations drag on, “Boko Haram is more likely to decide to use the girls for forced marriages instead of as bargaining chips, because the negotiation is not moving forward.”

Politics have bedeviled the issue, with many distracted by upcoming presidential elections in February 2015. The first lady, Patience Jonathan, and some other supporters have claimed the reports of the April abductions of the schoolgirls were fabricated to discredit her husband’s administration.

Last week, a presidential committee investigating the kidnappings stressed that they did in fact happen and clarified the number of students who have been kidnapped. It said there were 395 students at the school, 119 escaped during the siege of the school, another 57 escaped in the first couple of days of their abduction, leaving 219 unaccounted for.

This year, the Boko Haram insurgents have embarked on a two-pronged strategy – bombing in cities and a scorched-earth policy in rural areas where they are devastating villages. Nigeria’s capital, Abuja, the central city of Jos and the northeastern state capital of Maiduguri, the birthplace of Boko Haram, all have been bombed.

On Monday, an explosion at a medical college in the northern city of Kano killed at least eight people and wounded 12, police said. It was the third bomb blast in four months in Kano, Nigeria’s second city.

Also on Saturday, the same day as the latest abductions, scores of Boko Haram fighters attacked four other villages, near Chibok town from which the girls were kidnapped. Witnesses said at least 33 villagers were killed as well as six vigilantes and about two dozen Boko Haram fighters.

The group evolved five years ago from an Islamic sect preaching against the corruption that keeps most Nigerians impoverished despite their country’s oil wealth into a violent movement that wants to enforce Islamic law across Nigeria, though half the country’s 170 million people are Christians.

Its attacks have become more frequent and deadly, with more than 2,000 people estimated killed this year, compared to 3,600 in all the four previous years.