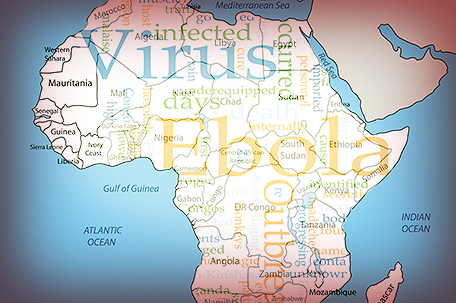 FREETOWN, Sierra Leone — Sierra Leone on Thursday took the dramatic step of sealing off districts where more than 1 million people live as it and other West African countries struggle to control the Ebola outbreak that has claimed thousands of lives.

With three new districts under quarantine, about one-third of Sierra Leone’s 6 million people are now living in areas where their movements are heavily restricted. In parts of Sierra Leone and in neighboring Liberia where these cordons have been used in this outbreak, food prices have soared, some markets have shut and the delivery of goods has slowed.

“There is a desperate need to step up our response to this dreaded disease,” the Sierra Leone government said. “The prognosis is that without additional interventions or changes in community behavior, the numbers will increase exponentially and the situation will rapidly deteriorate.”

President Barack Obama warned a meeting at the United Nations on Thursday that the world is not doing enough to stop the outbreak, saying there is “a significant gap between where we are and where we need to be.”

The Ebola outbreak, the world’s largest ever, has hit Sierra Leone, Liberia and Guinea hardest and is believed to have sickened more than 6,200 people. Senegal and Nigeria have also had Ebola cases, but it appears the disease has been contained in those countries.

U.S. health officials warn that the number of infected people could explode to 1.4 million by mid-January, adding that the outbreak could peak well below that if efforts to control the outbreak are ramped up.

The outbreak’s unprecedented scale and geographic spread have pushed governments to impose severe measures like the cordons, but the disease has continued to overwhelm efforts to contain it.

In an address to Sierra Leone on Wednesday night, President Ernest Bai Koroma put Port Loko, Bombali, and Moyamba districts under isolation with immediate effect, allowing only people delivering essential services to enter and circulate within these areas. The restrictions will remain in place until the chain of transmission is broken, officials said.

In other parts of Sierra Leone, including the capital, Freetown, homes will be put under quarantine when cases are identified, according to a government statement. Security forces surrounded a house in a Freetown slum on Wednesday, quarantining residents inside, after a popular herbalist who lived there died from Ebola. The forces will ensure that no one leaves or enters until it’s clear that no one else in the house has been infected.

Two districts near the outbreak’s epicenter – Kenema and Kailahun – were isolated about two months ago. In all, the movement of more than 2 million people is now restricted in Sierra Leone.

A sharp increase of cases in the capital is driving the outbreak’s spread in Sierra Leone, the World Health Organization said Thursday, also noting that the three districts newly cordoned off are experiencing increased infections.

Restricting the movement in these “hotspots” could help to prevent the disease from spreading to new areas, but there’s not much evidence on how this sort of measure works in an Ebola outbreak, said Sebastian Funk, lecturer in infectious diseases at the London School of Hygiene and Tropical Medicine.

“If transmission of Ebola mostly happens at home, it could make things worse. And it could also potentially seed mistrust and cause people to hide cases,” he said. “It may buy you some time but it is probably not going to stop the epidemic.”

Liberia, the country hardest-hit by the disease, cordoned off a large slum in its capital Monrovia at one point to slow transmission.

But it has continued to see cases balloon in the city. On Thursday, frustrated residents of Monrovia gathered outside the city’s newest treatment center where patients sometimes had to wait for hours to be admitted.

“It is kind of pathetic to come and then see patients lying all on the ground and nobody to even see them,” said resident Abraham Sesay.

Liberia alone needs 1,500 more beds to treat Ebola patients than are being set up, WHO said Thursday. Dr. Frank Mahoney, head of the U.S. Centers for Disease Control and Prevention team in Liberia, said at a news conference that teams were racing to meet that need.

“But they (the increasing number of cases) have been outpacing our ability to set them up,” he said.