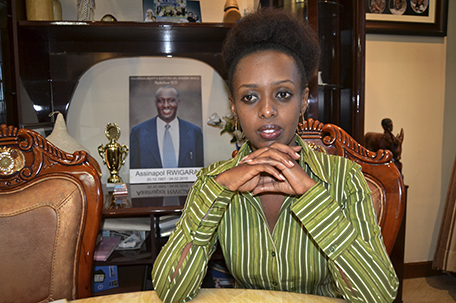 Diane Shima Rwigara, 35, is photographed next to a portrait of her father, business tycoon Assinapol Rwigara, at her home in Kigali, Rwanda. The brother of the former presidential hopeful in Rwanda said Thursday, Aug. 31, 2017, that Diane Rwigara and four other family members are in police custody. (AP Photo, File)

KIGALI, Rwanda–Rwandan prosecutors on Tuesday charged a prominent critic of the long-time president with forgery and inciting insurrection against the state.

Diane Rwigara faces up to 15 years in jail if she is convicted of the more serious offense of inciting insurrection.

“What we have done today is to file a case in court officially against Rwigara and once the court sets a hearing date the trial will start,’’ Justin Nkusi, a spokesperson for Rwanda’s public prosecutor, told The Associated Press.

Rwigara and some members of her family have been in detention since Sept. 23. Her mother and sister also face criminal charges.

Rwigara tried to run against President Paul Kagame in Rwanda’s Aug. 4 presidential vote but was disqualified on grounds that she lacked enough supporting signatures and had forged some. Rwanda’s electoral commission said she turned in signatures of some people who had long been dead and others who belonged to a rival political party. Rwigara denied it.

Rwigara insists the charges against her are politically motivated after she spoke critically of Kagame’s human rights record.

In an interview with the AP earlier this year, the 35-year-old acknowledged the risks of running against one of Africa’s longest-serving leaders. “People disappear, others get killed in unexplained circumstances and nobody speaks about this because of fear,’’ she said. “We must end this silence.’’

“The Rwandan government’s crackdown shows that it is unwilling to tolerate criticism or accept a role for opposition parties, and it sends a chilling message to those who would dare challenge the status quo,’’ the group’s Ida Sawyer said in a statement. “With each arrest in Rwanda, fewer and fewer people will dare to speak out against state policy or abuse.’’

Rwanda has won praise for its advances in economic development and women’s rights over the past 20 years, but critics say Kagame is a dictator who tolerates little criticism.

Rwigara is the daughter of the late Assinapol Rwigara, a businessman who fell out with Kagame before his death in a car accident in 2015.

She was a women’s rights activist before she announced her plans to run against Kagame, who has been de facto ruler or president of this central African country since the end of the 1994 genocide.

Kagame won the last election with more than 98 percent of the vote.