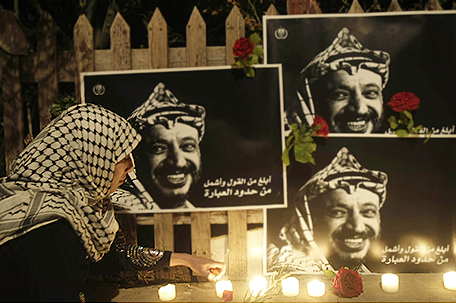 ABOVE PHOTO: A Palestinian woman lights candles under posters of late Palestinian President Yasser Arafat, marking the 9th anniversary of his death, in the
West Bank city of Nablus, Monday, 11 Nov, 2013. Arafat died Nov. 11, 2004 at a French military hospital, a month after falling ill at his West Bank
headquarters. It is now believed from medical reports from Russia, that the Palestinian leader was possibly poisoned by a rare and extremely lethal
substance.

By Karin Laub and Mohammed Daraghmeh

RAMALLAH, West Bank — Four investigations, hundreds of testimonies and stacks of medical reports on Yasser Arafat’s unexplained death in 2004 have failed
to produce hard evidence of what killed him – and findings presented Friday only created more confusion.

Palestinian officials said a report they received from Russia on the role of radioactive polonium in Arafat’s death was inconclusive. They spoke just a day
after Swiss scientists said the Palestinian leader was probably poisoned by the rare and extremely lethal substance.

Despite those discrepancies, the Swiss and Russian reports agreed that Arafat’s death “was not caused by old age or disease, but as a result of a toxic
substance,” said Dr. Abdullah Bashir, a medical expert in the three-member Palestinian team that has been investigating Arafat’s death. This, he told a
news conference, is in line with the long-standing Palestinian contention that Arafat was poisoned.

The reports revived Palestinian allegations that Israel was behind the attack, despite its denial.

The Palestinian team’s leader, Tawfik Tirawi, said Israel had the technical means and the motive.

“I say, with all the details available about Yasser Arafat’s death, that he was killed, and that Israel killed him,” he said. The former Palestinian
intelligence chief did not present evidence to back up the claims.

In the four years leading up to his death, Arafat’s relationship with his longtime nemesis, Israel’s then-Prime Minister Ariel Sharon, had become
increasingly hostile. Sharon, a hard-liner, blamed Arafat for encouraging anti-Israeli violence instead of working toward a peace deal and kept him
isolated at his West Bank compound for extended periods.

Former Sharon aide Raanan Gissin reiterated Friday that Israel had nothing to do with Arafat’s death. “The Palestinians are using Israel as a scapegoat,”
he said. “If Arafat was murdered, then he (the killer) should be sought among the heads of the Palestinian Authority.”

Tirawi said his team would spare no effort to solve the mystery, but it’s not clear where an investigation could go from here, considering the
Palestinians’ limited technical means. Tirawi said a decision on a possible international tribunal – like the one that investigated the assassination of
Lebanese Prime Minister Rafik Hariri – would be up to Arafat’s successor, President Mahmoud Abbas.

Abbas has not commented on the substance of the latest findings. A new probe could invite close scrutiny of Israel as well as Palestinian aides and
bodyguards who surrounded Arafat in his compound.

Arafat died Nov. 11, 2004 at a French military hospital, a month after falling ill at his West Bank headquarters. At the time, French doctors said he died
of a stroke and had a blood-clotting problem, but records were inconclusive about what caused that condition.

The Palestinians launched an investigation at the time, and Tirawi said Friday that it encompassed hundreds of statements from Palestinians and
non-Palestinians in the West Bank and around the world. No suspects emerged and no arrests were made.

The investigation hit a dead end, and was only revived when the satellite TV station Al-Jazeera persuaded Arafat’s widow, Suha, last year to hand over his
hospital bag with underwear, headscarves and other belongings. Mrs. Arafat has lived in exile since her husband’s death and is estranged from most of the
Palestinian leadership.

The items in the bag were examined by Switzerland’s Institute for Radiation Physics, which found elevated traces of polonium.

Earlier this year, Arafat’s grave in his Ramallah compound was reopened. Swiss, Russian and French scientists were given samples of the remains and burial
soil.

The Russians had been invited by Abbas who wanted another opinion, and the French team was part of a legal case Mrs. Arafat was pursuing in France. The
French team has not yet released its findings.

The Swiss scientists said Thursday that they found elevated traces of polonium-210 and lead in Arafat’s remains, and that the timeframe of Arafat’s illness
and death was consistent with poisoning from ingesting polonium.

Francois Bochud, a member of the Swiss team, said that the results “reasonably support the poisoning theory.”

Bashir, the Palestinian physician, said the Russian team sent its findings to the Palestinian Authority several days ago and the full report would be made
public at a later time.

Bashir said that the Russian scientists did not find enough evidence to determine that polonium-210 “caused the acute radiation syndrome leading to death.”

He did not elaborate at the news conference. He later told The Associated Press that the Russian investigators did find elevated levels of polonium, but
declined to answer further questions.

Al-Jazeera posted online what it said was a 15-page excerpt from the report by Russia’s Institute of Medical and Biological Research. Officials at the
state-run institute were not available for comment late Friday on whether the excerpts are authentic.

In another twist, Al-Jazeera quoted the source from whom it obtained the report as saying the Russian government asked the scientists to keep the findings
intentionally vague.

The station said the excerpts show that only four of 20 samples were examined by the Russian team.