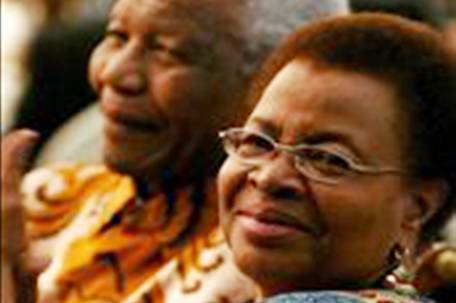 Graca Machel, third wife of the late Nelson Mandela, will handle her husband’s affairs, said a spokesman for the AbaThembu royal family, putting to rest for the moment various claims on the Mandela estate by other family members.

“The passing of Mandela does not terminate his commitment to Machel,” said family spokesman Chief Daludumo Mtirara.

No member of the Mandela family may intimidate fMachel, the royal family warned, adding that she should not face abusive language or threats to leave the Mandela homes in Houghton or Qunu.

Reports that Mandela’s children were moving to evict Machel from the house she and her husband shared were picked up widely by local media.

The spokesman for the royals said emphatically: “Nkosikazi Nosizwe Graca Machel remains under the umbrella of the Mandela family and members of the family who do not respect her must refrain from that trend because it is a disgrace that undermines our custom.”

Makaziwe, the eldest daughter, reportedly ordered that locks be changed at the family homestead in Qunu, in the Eastern Cape, and that his eldest grandson Mandla Mandela be locked out.

The Mozambican-born Machel has not announced her future plans as she is still mourning.

At the Mandela memorial on Dec. 15, the two wives, Graca and Winnie, were praised in a speech by Malawi President Joyce Banda.

“As an African woman and leader,” said Banda, “I wish to acknowledge Mama Winnie Madikizela Mandela for her efforts and steadfastness for standing with Tata Mandela before and during Tata’s imprisonment and for being in the forefront of ANC’s struggle for liberation. And to you, Mama Graca Machel, I wish to thank you for your visible love and care especially during Tata’s last days…To both of you, the love and tolerance you have demonstrated before the whole world during the funeral has shown us that you are prepared to continue with Tata’s ideals.”