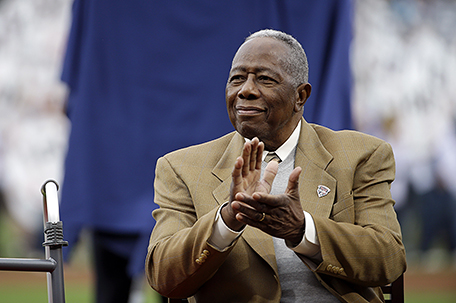 ABOVE PHOTO:  Hank Aaron applauds during a ceremony celebrating the 40th anniversary of his 715th home run before the start of a baseball game between the Atlanta Braves and the New York Mets, Tuesday, April 8, 2014, in Atlanta.  (AP Photo/David Goldman)

The 80-year-old Aaron told USA Today Sports last week: “Sure, this country has a black president, but when you look at a black president, President Obama is left with his foot stuck in the mud from all of the Republicans with the way he’s treated. We have moved in the right direction, and there have been improvements, but we still have a long ways to go. The bigger difference is back then they had hoods. Now they have neckties and starched shirts.”

Since the comments went viral, USA Today Sports reports that the Atlanta Braves front office has been deluged with racist letters and emails regarding Aaron.

“Hank Aaron is a scumbag piece of (expletive) (racial slur),” a man named Edward wrote in an email, according to USA Today Sports. “My old man instilled in my mind from a young age, the only good (racial slur) is a dead (racial slur).”

Some letters call Aaron a “racist scumbag” and “classless, racist.” Others said they would never attend a Braves game again until the team fires him as senior vice president.

In the original interview, Aaron stated that there is still room for improvement for race relations in the U.S.

“We have moved in the right direction, and there have been improvements, but we still have a long ways to go in the country,” Aaron told USA Today Sports.

Aaron described the racist letters he has kept for decades as he was chasing Babe Ruth’s home run record.

“To remind myself that we are not that far removed from when I was chasing the record,” Aaron explained to USA Today Sports. “If you think that, you are fooling yourself. A lot of things have happened in this country, but we have so far to go. There’s not a whole lot that has changed.”

Aaron was honored before the Braves game last Tuesday night against the New York Mets with a ceremony commemorating the 40th anniversary of his 715th home run, the one that pushed him past Babe Ruth and gave him the major league record.

Aaron finished with 755 home runs, but was eventually passed on the career list by Barry Bonds, whose career was tarnished by steroids allegations. Bonds has 762 homers, but many baseball fans don’t accept that number and stand by Aaron as the true record-holder.

Speaking with reporters after the ceremony, Selig was asked about Aaron being called the true home run king.

“I’m always in a sensitive spot there, but I’ve said that myself and I’ll just leave it at that,” Selig said.

During the ceremony Braves chairman Terry McGuirk said Aaron “set the home-run record the old-fashioned way” and added “You will always be the home run king of all time.”

Aaron was given a standing ovation in the ceremony before the game. Aaron broke Ruth’s record with his homer on April 8, 1974, off the Dodgers’ Al Downing.

Downing attended the ceremony and threw out the first pitch. Some of Aaron’s 1974 teammates returned, including Dusty Baker, who was on-deck when the record-breaking homer was hit, Ralph Garr, Phil Niekro, Ron Reed, Marty Perez and Tom House, who caught the homer in the bullpen.

Aaron thanked fans “for all your kindness all these many years.” Aaron, recovering from recent hip-replacement surgery, used a walker.

“The game of baseball was a way that I relaxed myself each year that I went on the field for 23 years,” Aaron said. “I gave baseball everything that I had, everything, every ounce of my ability to play the game I tried to play to make you the fans appreciate me more. Thank you.”

Selig, Aaron’s longtime friend, established the Hank Aaron Award in 1999 to honor the top hitter in each league. He called Aaron’s 715th homer “the most famous and treasured record in American sports.”

Selig said Aaron was a worthy successor to Ruth as home-run king “because he is the living embodiment of the American spirit. … Baseball is forever our national pastime because of people like Henry Aaron.”

The Braves wore their 1970s era white-and-blue uniforms, complete with small “a” caps, in tribute to Aaron. The Braves are wearing an Aaron 40th anniversary patch on their uniform sleeves this season.

The numbers “715” were painted on the outfield grass, stretching from left-center to right-center.

The Braves unveiled Aaron jerseys from other college and professional teams in the Atlanta area. Falcons owner Arthur Blank, former Georgia coach and athletic director Vince Dooley and former Georgia Tech coach Bill Curry were among those who stood with their teams’ jerseys adorned with Aaron’s name and No. 44.

The outfield was filled with fans, each wearing blue 44 Braves jerseys and each holding baseball-shaped signs bearing numbers from 1 to 715.