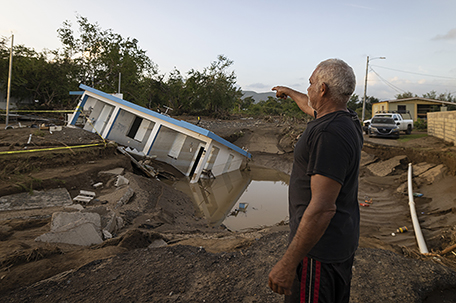 ABOVE PHOTO: A man points to a home that was collapsed by Hurricane Fiona at Villa Esperanza in Salinas, Puerto Rico, Wednesday, September 21, 2022. (AP Photo/Alejandro Granadillo)

TOA BAJA, Puerto Rico — City worker Carmen Medina walked purposefully through the working-class community of Tranquility Village under a brutal sun, with clipboard, survey forms and pen in hand — part of a small army of officials trying to gauge the scope of disaster caused by Hurricane Fiona’s strike on Puerto Rico.

She stopped at a white-and-seafoam green house and asked the owner to detail her losses in the storm that had flooded much of the town of Toa Baja.

“Oh, my dear,” responded Margarita Ortiz, a 46-year-old house cleaner standing in a home that was nearly barren because so many flood-damaged belongings had already been discarded.

Pockets of water still bulged from her ceiling Friday in what had been a newly painted house, and Ortiz listed what she could recall of her lost furniture and other goods.

After staying in a shelter and with a friend for days, she hopes to move back into her home soon: “When you lose your bed, you lose your head.”

Fiona hit southwestern Puerto Rico with 85 mph winds on Sept. 18 and the broad storm unleashed flooding across the island, which still had not recovered from 2017’s Hurricane Maria, a stronger cyclone that slashed across the U.S. territory, obliterating the power grid, which had since been patched but not fully rebuilt.

Puerto Rico’s government has said it expects to have a preliminary estimate of the damage Fiona caused in roughly two weeks.

As of Sunday, about half of Puerto Rico’s 1.47 million power customers remained in the dark, and 20% of 1.3 million water customers had no service as workers struggled to reach submerged power substations and fix downed lines.

Power company officials announced last Sunday that 1.1 million to 1.3 million clients could have power by Friday, Sept. 30 but warned those estimates could change. They did not say when the entire island would be energized.

“(Fiona) affected our whole infrastructure. We are doing everything we can to fix it,” said Lawrence Kazmierski, senior vice president for Luma, the company that took over the island’s power transmission and distribution more than a year ago.

Gas stations, grocery stores and other businesses have temporarily shut down due to lack of fuel for generators. The National Guard first dispatched fuel to hospitals and other critical infrastructure.

“We’re starting from scratch,” said Carmen Rivera as she and her wife mopped up water and threw away their damaged appliances, adding to piles of rotting furniture and soggy mattresses lining their street.

Despite being on the opposite side of the island from where Fiona’s eye made landfall, Toa Baja was especially hard hit because the Plata River — Puerto Rico’s longest — overflowed its banks into the city of more than 74,000 people.

Floodwaters passed the 5-foot mark at Rivera’s wood-and-concrete home. She wondered if she might get any financial help, and when.

“I work for the municipality, and what I earn is not, ‘wow,’” she said.

Toa Baja officials estimated it could take a month to complete their door-to-door survey aimed at determining damage so that people can get financial aid.

For some, it was more than just about financial loss as people used the chance to describe their stress as well.

“I see an emotional exhaustion in people. It’s a ‘here we go again,’” said Gretchen Hernández, a social worker who was overseeing the citywide survey.

Many have been forced to throw out food because of the power outages — and some people pitched in to help neighbors.

More than two dozen cars lined up in Toa Baja, where Aida Villanueva was handing out food to fellow members of the community — grapes, croissants, chicken, rice, vegetables and the like.

Seventy-four-year-old Ana Butter arrived before dawn for a chance at food, complaining about a lack of official aid.

“No one has stopped by my house,” said Butter, who lives in the neighboring town of Dorado.

Someone in line wondered aloud what those without power were going to do with so much free chicken. Another yelled, “Tomorrow there’ll be a barbecue!” and the crowd laughed.

Many Puerto Ricans adrift in US hotels after Hurricane Maria