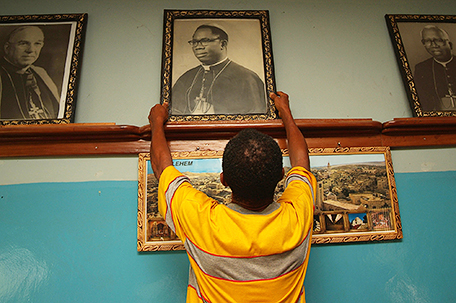 ABOVE PHOTO:  An unidentified man hangs back the picture of cardinal Francis Arinze at the Holy Trinity cathedral office in Onitsha, Nigeria, Tuesday, April 19, 2005. Many, in the city of Onitsha in southeastern Nigeria, where Cardinal Francis Arinze served as bishop had hoped Arinze would be announced the next pope. Cardinal Joseph Ratzinger of Germany, the Roman Catholic Church’s leading hard-liner, was elected pope Tuesday in the first conclave of the new millennium. (AP Photo/George Osodi)

VATICAN CITY — Pope Francis has laid down an ultimatum to defiant Nigerian priests: lose your job if you don’t obey me and your bishop.

Francis met June 8 at the Vatican with a delegation from the Ahiara diocese, where priests have been refusing to accept the 2012 appointment by the then pontiff, Benedict XVI, of the local bishop.

Vatican newspaper “L’Osservatore Romano”, reporting the pope’s unusually harsh order, said Sunday that Francis was acting “for the good of the people of God” by threatening to suspend the priests from the ministry if they didn’t pledge in a letter, by July 9, “total obedience” to Francis and accept Bishop Peter Okpaleke’s appointment.

Francis told the visiting delegation he was “very sad” about the priests’ refusal to obey and ruled out tribal loyalties as explaining the refusal.

Africa has been one of the continents where the Catholic church is growing. The faithful and clergy there often imbue their practices with local culture in dynamic contrast to more traditional routines in Europe or North America.

Francis’ move to end disobedience to the Vatican aims at ensuring the growing church there will be loyal to the pontiff.

His remarks to the visiting delegation indicated how dangerous he viewed any rebellion against papal authority.

Those priests opposing Okpaleke’s taking up of his office “want to destroy the church, which is not permitted,” Francis said in his address to the delegation.

Francis added: “the pope can’t be indifferent” to the rebellion.

He has often taken a conciliatory tone in resolving disputes, but in this one he was entertaining no diplomacy. He demanded that each priest in the diocese write to him asking forgiveness and “clearly manifest total obedience to the pope.”

They must also accept the bishop chosen by Rome. If, within a month, each priest doesn’t do so, he will be “ispo facto suspended,” such as from the celebration of the sacraments, and “will lose his current office,” Francis warned.

Francis acknowledged that his move “seems very harsh.” He added that he had even considered the extraordinary remedy of suppressing the entire diocese but didn’t, so as not to hurt rank-and-file faithful.

He said he thought the rebellious priests might have been manipulated from outside the diocese or even abroad, but named no culprits.

In 2015, the diocese served around 520,000 Catholics, out of a local population of about 675,000, and had 128 diocesan priests and seven other priests. It wasn’t immediately clear how many of the priests were involved in the rebellion against the bishop’s appointment.