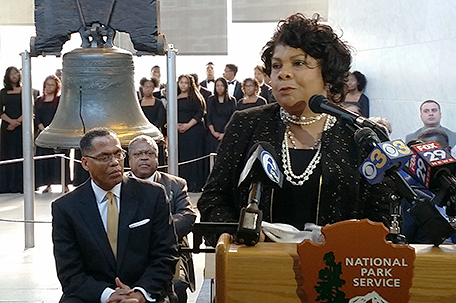 The annual event celebrates King’s legacy and benefits year-round programming for the association.

The well-attended Philly MLK DARE Let’s Reclaim MLK March for a Better America — focused on equality, justice, and shared prosperity in the face of rising right-wing extremism — filed past the Liberty Bell Pavilion in the brilliant sunlight last Monday.

The march provided the perfect backdrop for the 31st Annual Philadelphia Martin Luther King, Jr. Association for Nonviolence, Inc. National Bell Ringing Ceremony.  This ceremony — in which the Liberty Bell is symbolically tapped 12 times at noon — corresponds with similar bell ringing events held around the world marking the official beginning of the MLK birthday commemoration. The event was inaugurated by the late Coretta Scott King, widow of Dr. Martin Luther King Jr.

This official opening of the holiday is also part of the Annual Awards and Benefit Luncheon, held by the Philadelphia Martin Luther King, Jr. Association for Nonviolence, Inc. This association was founded by the late Dr. C. DeLores Tucker and local leaders in 1983. It is overseen by her husband and successor, president and CEO Dr. William Tucker.

The association – the only affiliate commissioned by Coretta Scott King and the Martin Luther King, Jr. Center for Nonviolent Social Change—provides year-round programming in addition to special events based on Dr. King’s teachings and principles.

At the ceremony, Philadelphia Mayor Jim Kenney paid homage to Dr. King and the many unsung leaders from Philadelphia’s past who also fought for freedom such as Octavius Catto and William Still. He also reiterated Philadelphia’s commitment to civil rights in the years to come — especially in light of challenges posed by the Trump administration.

“When that [Liberty Bell] became prominent in the country, the words of ‘all men are created equal, and are endowed by their Creator with certain unalienable rights of life, liberty and the pursuit of happiness,’ it did not apply to many of the people in this room,” Kenney said.“This country’s history has been an ongoing effort to make those words mean what they were meant to mean – for all Americans. That struggle will continue, every day, despite what we are feeling or are concerned and worried about in the upcoming years ahead. We in Philadelphia we will never walk back.

Our progressive attitude when it comes to civil rights for all people –for LGBT folks, for immigrants, for people of color, for all of us—we will fight that fight every day, and that Bell will be a symbol of our fight. We won’t give it up,” Kenney concluded.

Dr. William Tucker echoed similar sentiments when speaking with the SUN about Dr. King’s legacy in the challenging days to come.

“In the era of Trump, we need his [Dr. King’s] legacy more than we have ever needed it before, because his legacy is a very simple legacy. It’s a legacy of peace, a legacy of love, and a legacy of nonviolence. We need to be able to embrace that more than ever before, because if we embrace those principles and remain steadfast, regardless of what anybody does, we will overcome…we have to remain vigilant and diligent. That is why we have this luncheon every year, and the ceremony at the Liberty Bell,” Dr. Tucker said. 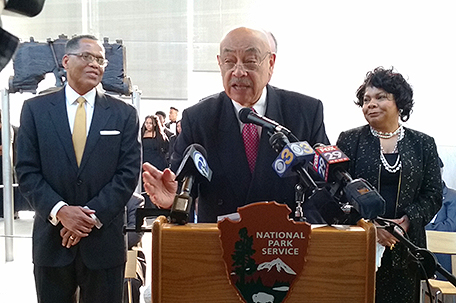 “At a time when some of us don’t feel like we can go on, we can go on,” April Ryan, White House Correspondent for American Urban Radio Network (AURN) and this year’s Honorary Bell Ringer, told the audience. Ryan is also the author of “The Presidency in Black and White” and “At Mama’s Knee: Mothers and Race in Black and White.”

“We’ve seen this [challenging times] before. Dr. King, C. Delores Tucker – all of these people have marched for us,  Ryan continued.

“In the hours right after it was confirmed that Donald Trump was the 45th President of the United States, Chris Darden—the former prosecutor in the O.J. Simpson trial— an African-American who is a Republican said ‘It’s a new time of activism’… I asked my mentor, my first radio program director, Kweisi Mfume, former Congressman from Maryland and former head of the NAACP, ‘people are confused, they don’t know what to do; what time is this?’ He said ‘We are at a crossroad…we must remember the blueprint that Dr.King left for us; we must activate en masse.’

I spoke with the great Harry Belafonte in his home just a few days ago, and he said,’ this is a great time!’ I asked ‘Why?’ and he said ‘Because for a time like this is when there will be radical activism for change,’” Ryan concluded.

The two recipients of this year’s Drum Major Award for Philanthropic Community Development were Dr. Arthur C. Evans, Jr., PhD., Commissioner of Philadelphia’s Department of Behavioral Health and Intellectual disAbility(DBHIDS), and The Philadelphia Foundation under the leadership of President and CEO Pedro Ramos.

The 2017 C. DeLores Tucker Volunteer Award was presented to Howard P. Mallard, Jr., a professional photographer who has offered his services to the Philadelphia MLK, Jr. Association for Nonviolence, Inc. for over 20 years.

The award also went to Lillie Oliver, an equipment specialist at Thomas Jefferson University Hospital in the Clinical Engineering Department who has volunteered with the association for over 25 years. Among the many roles she has played in the organization over the years are as an event planner for the annual King Association Children’s Christmas Dinner Party and as Liberty Bell Ceremony coordinator.

For more information about the Philadelphia MLK, Jr. Association for Nonviolence, Inc., visit: www.philadelphiamlk.org, or call (215) 751- 9300.