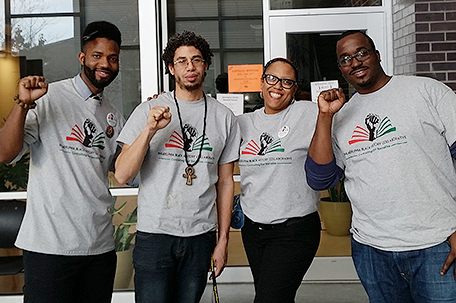 In 1967, 3,500 students from several School District of Philadelphia high schools staged a walkout, demanding that a Black Studies course be introduced into the curriculum. Nearly four decades later in 2005, the SRC mandated that each Philadelphia public high school complete an African American History course as part of their graduation requirements.

“The notion of self-determination and demanding what you want for yourself and your city is extremely important,” Yaasiyn Muhammad, educator and Philadelphia Black History Collaborative co- founder explained.

“We stand on the shoulders of those young people who chose to walk out of their schools in 1967, protest down at the School District Building, and demand Black History courses at their schools. We recognize how important that act was, and how it started the conversation that led to the 2005 mandate, and eventually to the formation of this organization. We want to acknowledge those elders and ancestors,” he concluded.

Over 200 students and educators attended the group’s daylong inaugural conference last Saturday, held at the Kensington CAPA High School to discuss how to develop a dynamic, in-depth curriculum program based upon African American History from the post-civil rights era to the present.

I was part of a group of middle and junior high school students in Philadelphia who came of age a few years after the 1967 walkout. The burgeoning “Black Power” movement –exhilarating and radical — seemed to be the subtext of everything.

Our social studies teachers felt this as well. Frustrated with the dearth of information in our textbooks, they fashioned their own Black History curriculum from books smuggled into class from their home libraries. There was no policy in place, and no hurry to fashion one. They used lecturing and the blackboard to teach the course. 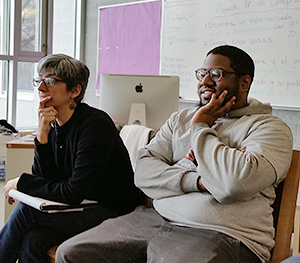 They taught from texts like Lerone Bennett Jr’s “Before the Mayflower: A History of Black America 1619-1964,” which is the one I remember most. There was palpable tension amongst the other teaching staff and administration. Most of the kids loved the class, but not everyone – even in a liberal, integrated school.

It was uncharted territory. Much of it challenged the existing narrative.

Some parents found out and complained. A petition was circulated to get the teachers fired. It was not successful.

It might have been because I grew up surrounded by hundreds of books – many of them Black History classics – that I was confused about this reaction. “Why should anyone be upset about learning something interesting and relevant?” I wondered to myself.

The keynote speaker was Princeton professor and author Keeanga-Yamahtta Taylor, who emphasized the manner in which the historic struggles of African-Americans inform the current situation, and the path forward.

“When Black people go into struggle, it unravels dominant narrative (or founding lie) of America,” Taylor said. “Attempts to distort the Black struggle of previous generation limits options in today’s struggle.” She told the attendees that these factors must be considered while African Americans “build organizations to fight for future that we want.”

Most of the current students who participated in the discussion were students of PBHC member Ismael Jimenez, who teaches African-American History at Kensington- Creative Academy for Performing Arts High School, where the conference took place.

The students enjoy his teaching style, which charges the students to employ critical thinking and analysis about African American history, current events and how it all ties together.

For several of his students – who are predominantly Black and Hispanic – it was the first time that they were introduced to the subject in a personalized way that encouraged self -awareness, and pride. They agreed that this motivatess them to learn more.

The students also concurred that history occurs on a continuum, and that you need to know where you’ve come from to understand where you are going.

The educators present questioned the students and shared stories about what works and what doesn’t in their respective classrooms. Several shared their frustration with pushback from some of their students and parents — many of them White — about the African American History course requirement, its relevance and face a constant struggle for resources and collegial support.

And not unlike the experience of my social studies teachers nearly 50 years ago, many still face daily micro-aggressions and fear of reprisals for daring to venture outside of the box and introduce extracurricular materials and activities.

Students and educators alike concluded that the work that PBHC is undertaking is much needed, and all were anxious to support or take part in future curriculum building projects.

“We are creating a network of educators who will have access to materials not currently available through the School District of Philadelphia curriculum,” said Ismael Jimenez. The first curriculum module will include African- American History teaching resources, which cover the time period from 1968 until the present- roughly 50 years.

PBHC also has their sights set on recent and future history.

“They say that history repeats itself every 50 years. We are reaching that mark [the post-civil rights movement period which began in 1968] now. We want to control the narrative [going forward] before it becomes all ‘Jimi Hendrix and moving into the suburbs,’” Jimenez said.

The conference concluded with a program which included spoken word performances and short film project presentations by students representing different organizations in the city.

Monthly open meetings of the Philadelphia Black History Collective are scheduled to continue the discussion and curriculum-building process. The next meeting will take place at the Imhotep Charter High School, located at 6201 N. 21st Street on Thursday, March 9th, 2017 at 5:30 PM.

For more information about the Philadelphia Black History Collective, email: [email protected], or visit their Facebook page at: www.facebook.com/groups/BlackhistoryPHL/.