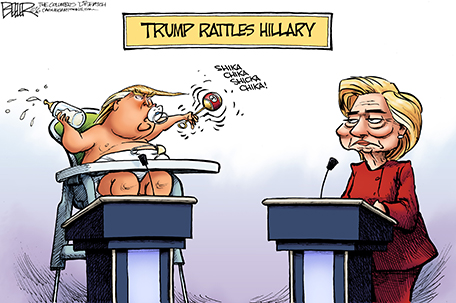 RICHARD MCCONOCHIE watched the debate on a big screen in a Canberra pub and said, “To me Trump aced it.”

“He came across as a man who could control himself. They said Trump’s ignorant of the issues. I think he proved that he had at least a working handle on most of the stuff he was talking about.”

“I think he’ll swing a lot of Americans over to Trump just by proving that he is not the sort of unstable, dangerous lunatic that he’s painted to be,” McConochie said. “I don’t see that Trump would be any more incompetent than Clinton.”

MILTON GAN, a Sydney-based photographer, said it seemed like Trump was trying to rein in his temper for the first 15 minutes, then went off the rails.

“The most ridiculous thing was at the end when he said he had the better temperament to be president,” Gan said, laughing. “It was just hilarious.”

Clinton came off prepared, confident and composed, Gan said: “Obviously, she’s done her prep and she’s got so much experience in politics and I think that really showed.”

KADHIM AL-MUQDADI, a Baghdad-based analyst, agreed with Trump’s comments that the withdrawal of U.S. troops from Iraq created a power vacuum and helped extremist militants regroup. He said the speed of the U.S. withdrawal was a “punishment” for Iraqis who were against the invasion.

“The American policy was not successful when it decided to withdraw its troops from Iraq,” al-Muqdadi said. “The withdrawal of the U.S. troops without leaving, at least, temporary bases, deteriorated the security situation and therefore helped to create IS and increase Iran’s influence.”

“If the Americans had a say in developing Iraq’s resources and then distributing the revenues, not necessarily seizing the assets, we would not see the endemic corruption,” Mousa said. He said that corruption is devastating the country and had helped fund militant groups.

He believes that Clinton will be serious in fighting and eliminating the Islamic State group “in a bid to correct (the United States’) grave mistakes in Iraq.”

“Clinton did not respond to the provocations. … while you saw an angry and tense Trump,” he said. “I thought he could provoke (her), but Clinton had a very good, calm attitude, and even with a sense of humor.”

“I think this could start to tip the balance for the undecided (voters), but you have to wait for the other debates.”

Trump is widely unpopular among Mexicans due to his disparaging remarks about immigrants and his repeated vows to build a border wall and make their country pay for it.

Former Foreign Relations Secretary JORGE CASTANEDA told Radio Formula he “worried” that Clinton did the best she could, “but on the whole economic part it seems to me that Trump had an impact, on … jobs, free trade, Trump did score goals on all that.”

“Trump was much better the first half-hour and then stumbled a lot in the last half-hour,” Castaneda added. “So, a tie!”

TIMI SOLEYE, an energy executive, stayed up to watch the debate in the middle of the night at his home in Lagos, Africa’s most populous city.

“Clinton has decent policies, I wished she should talk about them and just make her points,” he said. “Attempts to ridicule and characterize Trump policies were distracting in the beginning. And he looked dangerously reasonable at the beginning, but of course he veered off into his trademark semi-unreasonableness.”

Soleye described himself as conservative, but he called Trump’s characterization of world economics as a zero-sum game in which America must crush other countries to succeed “disheartening.”