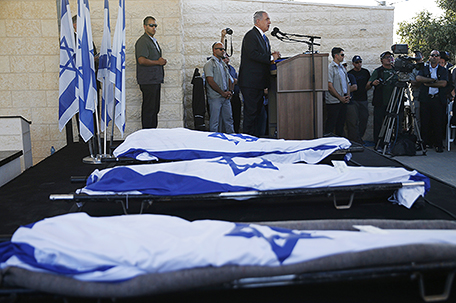 ABOVE PHOTO:  Israeli Prime Minister Benjamin Netanyahu eulogizes three Israeli teens who were abducted and killed in the West Bank during their joint funeral in the Israeli city of Modiin, Tuesday, July 1, 2014. Tens of thousands of mourners converged Tuesday in central Israel for the funeral service for three teenagers found dead in the West Bank after a two week search and crackdown on the Hamas militant group, which Israeli leaders have accused of abducting and killing the young men. The deaths of Eyal Yifrah, 19, Gilad Shaar, 16, and Naftali Fraenkel, a 16-year-old with dual Israeli-American citizenship, have prompted angry calls for revenge and Prime Minister Benjamin Netanyahu convened his security Cabinet for an emergency meeting to discuss a response to the killings, hours after airstrikes targeted dozens of suspected Hamas positions in the Gaza Strip.  (AP Photo/Baz Ratner, Pool)

JERUSALEM — A Palestinian teen was abducted and killed Wednesday, Palestinians said, accusing Israeli settlers of carrying out a revenge attack for the deaths of three Israeli youths. The accusation sparked clashes with Israeli forces and demands by the Palestinian president that Israel hold the killers accountable.

The latest claim stoked tensions already heightened by the deaths of the three Israeli teens, whose bodies were found this week 18 days after they were abducted in the West Bank, and a surge in fighting between Israel and Palestinian militants in the Gaza Strip.

Just hours after Israel buried the three teens, relatives of Mohammed Abu Khdeir said the 17-year-old was forced into a car in a neighborhood of east Jerusalem before it sped off. A burned body was found shortly afterward in a Jerusalem forest.

The youth’s relatives said they believed he was killed by extremist Israelis to avenge the deaths of the Israeli teenagers.

“Who else could do this? There’s no one else,” said Saed Abu Khdeir, the teen’s father. He said he had spent the day with police and given DNA samples to help identify the body, and was waiting for 100 percent confirmation from a forensics lab.

As of Wednesday evening, police said the testing was still ongoing. Police were also reviewing security camera footage taken from the scene. Relatives said the video showed a car nearing the youth, people stepping out and then forcing him into the vehicle as it drove away.

As news of the youth’s disappearance spread, hundreds of Palestinians in east Jerusalem torched light rail train stations and hurled stones at Israeli police, who responded with tear gas and stun grenades.

Israeli Prime Minister Benjamin Netanyahu called on authorities to swiftly investigate the “reprehensible murder” and urged all sides “not to take the law into their own hands.”

In Washington, the Obama administration condemned the killing as a “heinous murder” and called for the perpetrators to be brought to justice.

In a series of posts on Twitter, National Security Adviser Susan Rice said the U.S. was paying close attention to the investigation into the teen’s death and sent condolences to his family and the Palestinian people.

Secretary of State John Kerry called the killing “sickening” and said “there are no words to convey adequately our condolences to the Palestinian people.”

On Tuesday, hundreds of right-wing Jewish youths marched through Jerusalem, calling for revenge for the deaths of the Israeli teens, who Israel says were abducted and killed by Hamas militants. Israeli security forces have arrested hundreds of Hamas operatives across the West Bank.

Meanwhile, rocket fire from the Hamas-controlled Gaza Strip has intensified, and been met with Israeli airstrikes.

The barrage continued Wednesday, with the military saying nine mortar shells were launched from Gaza into Israel. It said Israel responded with an airstrike on one of the launch sites, scoring a “direct hit.” There were no immediate reports of casualties.

The clashes in east Jerusalem continued throughout the day. At midafternoon, masked men holed up in a mosque in the east Jerusalem neighborhood of Beit Hanina lobbed rocks toward Israeli security forces in the street below. Police responded by firing stun grenades toward the mosque.

The street was largely deserted and littered with rocks and debris, as a small fire set next to a trash bin spewed black smoke into the air. There were no reports of injuries.

“Everything is being examined. There are many possibilities. There is a criminal possibility, as well as a political one,” Israel’s public security minister, Yitzhak Aharonovitch, told Israel Radio. “I am telling everyone, let us wait patiently.”

The incident elicited international condemnation, with the U.N. envoy, Robert Serry, calling on all sides “not to further exacerbate an already tense atmosphere.”

On Tuesday, thousands of Israelis attended the funerals of Eyal Yifrah, 19, Gilad Shaar, 16, and Naftali Fraenkel, 16, who has dual Israel-American citizenship, whose bodies were found Monday in a field near the West Bank city of Hebron. Their disappearance gripped the country and the discovery of their bodies prompted an outpouring of grief.

Also Wednesday, Israel demolished the West Bank home of Ziad Awad, who was found guilty by a military court of killing an Israeli police officer in April. The demolition marked a return to a policy abandoned by the military in 2005. Israel sees house demolitions as a deterrent to violence, while critics charge it is a form of collective punishment.

In a separate incident, Palestinians in the West Bank town of Aqrabeh said their home was set on fire and the Hebrew words for “price tag” sprayed on the walls.

Radical Israeli settlers have been carrying out so-called “price tag” acts of vandalism in recent years to protest what they perceive as the Israeli government’s pro-Palestinian policies and in retaliation for Palestinian attacks.