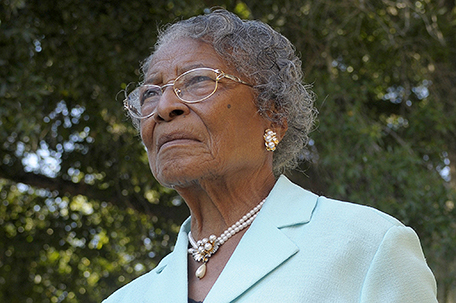 “Recy Taylor, a name I know, and I think you should know, too,” Winfrey said, sketching the outlines of the African-American woman’s assault by six White Alabama youths and her quest for justice.

Taylor, who died last December at age 97 shortly after the film’s theatrical release, is seen and heard briefly in it. Her words are powerful despite her frailty.

“I can’t but tell the truth of what they done to me,” she said, condemning both her attackers and the authorities who weren’t “concerned about what happened to me.”

The film mixes orthodox documentary elements — accounts from Taylor’s relatives and other contemporaries, the perspectives of historians — with haunting visual touches and music such as Fannie Lou Hamer’s “Go Tell It on the Mountain.” It blends into somber, unsettling poetry.

There are clips from so-called “race films,” vintage movies made by African-American moviemakers, including one in which a distraught woman flees from unseen danger. In a scene from Oscar Micheaux’s “Within Our Gates” (1920), a White man attacks a Black woman. 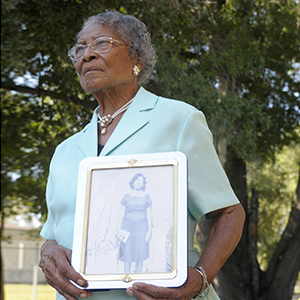 Recy Taylor, holds a photo of herself from her days in Abbeville, Ala., outside her home in Winter Haven, Fla. Taylor, a black Alabama woman whose rape by six white men in 1944 drew national attention, died Thursday, Dec. 28, 2017, according to her brother Robert Corbitt. She was 97. (AP Photo/Phelan M. Ebenhack, File)

The movie excerpts help “communicate very quickly that this didn’t just happen to Recy Taylor” and help broaden one woman’s ordeal to a “much larger canvas” about the peril Black women faced, filmmaker Buirski said.

In 1944, Taylor, then 24, married and a mother, was walking to her Abbeville, Alabama, home after an evening church service with two friends, an older woman and her 18-year-old son. Local Whites out joyriding stopped them and, at gunpoint, demanded Taylor get in their car.

They raped her repeatedly and, after forcing money into her hand, released her after she agreed to remain silent.

She stumbled home “crying and upset,” recalls her brother, Robert Corbitt. “Those young boys felt like they can do it and get away with it. They really felt like they could. They know nothing was going to happen to them.”

But Taylor fought back, recounting the assault to the local sheriff. Her courage put her family at risk — their home was firebombed — and eventually led to two faint-hearted, failed efforts to bring the case to trial in the Jim Crow South.

The roots of such inaction run deep. Yale associate professor Crystal N. Feimster, who is part of the documentary, has written that it was a legal impossibility for a female slave to file rape charges against a White man in any Southern state before 1861.

Northern Black newspapers doggedly covered Taylor’s case as it unfolded, prompting African-American protests and action by the NAACP. The civil rights group dispatched Parks, then the secretary in its Montgomery, Alabama, office, to meet with Taylor — before Parks gained fame as the woman whose refusal to move to the back of a segregated bus sparked a powerful boycott.

In a newspaper photo taken at the time, Taylor stares directly at the camera with an expression both stolid and determined. It’s a portrait of a young woman prepared to stand her ground.

At one point, the Abbeville sheriff dismissed Taylor as “nothing but a whore” whom he’d arrested before, then admitted she had never been jailed and that she and her family were of good reputation.

Filmmaker Buirski, who recounted the groundbreaking interracial marriage of Richard and Mildred Loving in a documentary and was a producer on the big-screen drama “Loving,” learned of Taylor from historian Danielle L. McGuire’s 2010 book, “At the Dark End of the Street: Black Women, Rape, and Resistance.”

“One of the things that I felt so strongly about in this film (and the ‘Loving’ documentary) is you have people who have the moral courage to stand up, and they change history as a result,” Buirski said. “They don’t have to be activists. Anybody can change history.”

There’s a question she’s fielded before, about why a White New Yorker felt compelled to make a film about Taylor, and she has a ready answer.

“I do feel that Whites and Blacks should be telling stories about each other. I think that Whites in particular have a responsibility to deal with this information because Whites really are the reason for the suffering that a lot of Blacks had,” she said.

Was she the right person to make the documentary?

“I’m the first person to say I don’t know what it’s like to be in a Black woman’s skin,” one who would recount Taylor’s life and times differently and maybe better, Buirski said.

But, she added, it’s up to African-American filmmakers to make “The Rape of Recy Taylor” the first “in a volley of stories” about her, not the last.

For rebroadcasting times for “The Rape of Recy Taylor” on STARZ, check your local cable guide for days and times.

Ala. leaders apologize for handling of 1944 rape