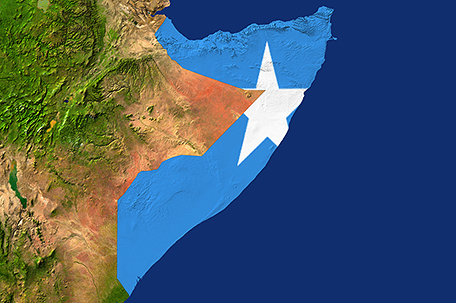 MOGADISHU, Somalia — Columns of African Union and Somali troops are moving deeper into land controlled by al-Qaida-linked militants, forcing fighters to flee from five towns in quick succession in a further squeezing of al-Shabab’s strongholds.

Al-Shabab has put up little resistance as the AU and Somali troops surged toward their strongholds over the last several days. Towns in the interior of Somalia with little relevance to the outside world – Rabdhure, Ted, Hudur, Wajid and Buudhubow – are now in the nominal control of Somalia’s Mogadishu-based government, a further step of success following al-Shabab’s ouster from Mogadishu in 2011.

“This current operation is against extremists and will continue until we recapture all territory,” Somali President Hassan Sheikh Mohamud said in a statement Monday. “We want to give back to the long-suffering Somali people an environment conducive to good governance and public services.”

The U.S. State Department said it welcomes the joint efforts by the AU and Somali soldiers to push al-Shabab from the towns.

Nicholas Kay, the U.N. envoy to Somalia, told the Security Council by videoconference from Mogadishu that the military advance is “significant and geographically extensive,” and he praised its “notable successes.”

“Somalia and Somalis desperately need improved security” which is “a vital task for 2014,” Kay said. “But the political dimension of state-building and peace-building is equally vital this year” and “national reconciliation must be fast-tracked.”

In response to the military incursion, al-Shabab’s reclusive leader, Ahmed Abdi Godane, spoke on the militants’ radio station and urged Somalis to join their ranks and fight against the offensive. He made explicit reference to Ethiopian troops taking part in the African Union military campaign.

There are about 4,400 Ethiopian troops in the 17,000-strong AU force. Other troops come from Uganda, Kenya, Burundi, Djibouti and Sierra Leone.

“This will make difficult for the group to organize attacks, train fighters and recruit at will,” said Mohamed Sheikh Abdi, a Somali political analyst based in Mogadishu.

Al-Shabab controlled much of Mogadishu during the years 2007 to 2011, but was pushed out of Somalia’s capital city by African Union forces from Uganda and Burundi. The militants then lost control of the port city of Kismayo, crippling one of its major income generators.

Despite those setbacks, the group continues to carry out devastating suicide and gunfire attacks in Mogadishu every several weeks or months.

The African Union’s military spokesman in Somalia said the current offensive, which began last week, would continue to bring to an end to “abuses” by the militant group.

Seeking to win support for the offensive, Mohamud, the president, told Somali residents: “This is the time to decide your destiny.” Mohamud said his plan is to implement federalism and build a democracy that will allow national elections in 2016.