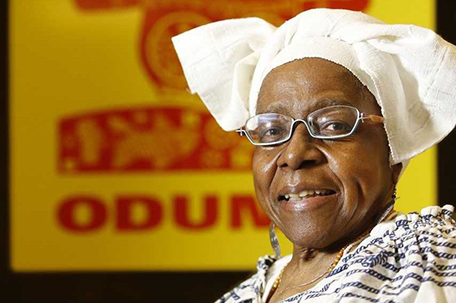 Lois Fernandez, the co-creator of the annual Odunde festival in South Philadelphia, leaves an African cultural celebration as her legacy

Lois Fernandez, the woman whose visit to a festival in Nigeria became a yearly tradition that brought visitors and dignitaries from around the world to South Philadelphia every year, died last Sunday morning.

Fernandez was the co-creator of the Odunde festival, a celebration of African history and culture that is held every year on the second Sunday in June. Odunde is recognized as the nation’s largest African-American street festival.

After visiting the Continent in 1972 and seeing Nigeria celebrate the Yoruba New Year with the Oshun festival, Fernandez came home and co-created Odunde, which celebrated its 42nd anniversary in June, to introduce Philadelphians to African culture.

The festival was only a block long — 22nd and South Streets was its original home — and Fernandez was armed with only a $100 grant and a dream to make it happen. It has since grown to encompass 12 blocks worth of vendors, artisans and performances and has managed to survive despite the neighborhood gentrifying around it.

Part of the reason that it was able to do that was because Fernandez had the help of local officials such as Congressman Bob Brady (D), who has helped the festival through the Philadelphia Traditions Fund and Congressman Dwight Evans (D), who as a State Representative got a major grant for the festival in the early 2000s that allowed it to hold receptions honoring African Dignitaries as part of Odunde’s festivities.

Odunde, which has since become a year-round event that includes pottery and yoga classes and a host of children’s events, was an extension of Fernandez’s activism.

Before creating Odunde, Fernandez worked for Philadelphia’s Department of Public Welfare as a social worker, helping children in foster care, children in street gangs in South Philadelphia, and as a parent counselor. She was also an adjunct professor at Lincoln University, training the next generation of social workers.

Fernandez was a graduate of Antioch College and the Community College of Philadelphia. She was also a certified HIV/AIDS educator and held certificates in Arts Management from the University of Massachusetts and parent counseling from Saint Louis University.

Her daughter Oshunbumi, who is now executive Director of Odunde 365, the organization that oversees the festival, survives Fernandez.

Funeral services for Lois Fernandez will be held on Saturday, August 19, at the Universal Audenreid High School, 3301 Tasker St. The viewing will be held from 8 a.m.-10a.m. and services from 10 a.m.-11a.m. 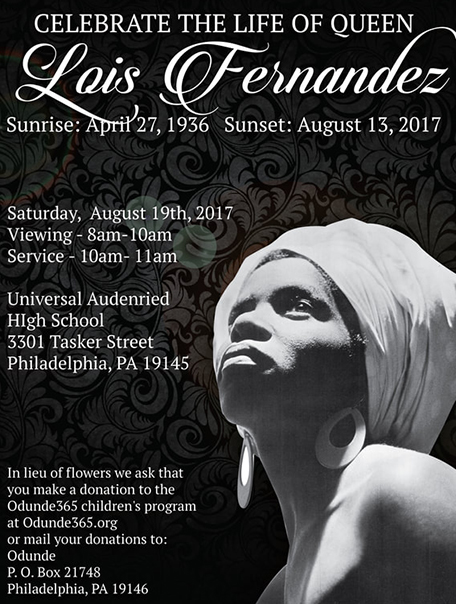