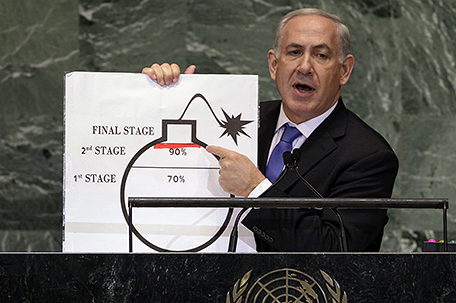 File – In this Sept. 27, 2012 file photo, Prime Minister Benjamin Netanyahu of Israel shows an illustration as he describes his concerns over Iran’s nuclear ambitions during his address to the 67th session of the United Nations General Assembly at U.N. headquarters. Israeli Prime Minister Benjamin Netanyahu provided the U.N. with a memorable moment with a cartoon bomb a year ago, and he can be expected to again call for a hard line against Iran’s nuclear program backed by the credible threat of force. But the goalposts have moved a little: some at the General Assembly’s annual meeting will be calling for a more nuanced approach by the world in response to the emergence of a moderate Iranian president. (AP Photo/Richard Drew, File)