Obama and Kenya: First trip to father’s homeland as President 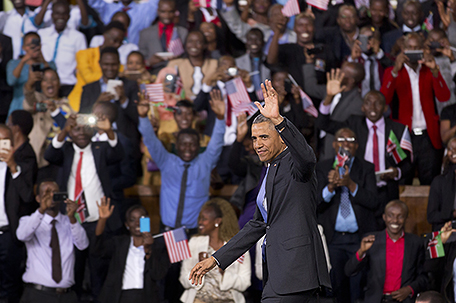 ABOVE PHOTO:  President Barack Obama waves to the crowd as he arrives to give a speech at the Safaricom Indoor Arena in the Kasarani area of Nairobi, Kenya Sunday, July 26, 2015. Obama is traveling on a two-nation African tour where he will become the first sitting U.S. president to visit Kenya and Ethiopia.  (AP Photo/Ben Curtis)

WASHINGTON — When Barack Obama visited Kenya for the first time nearly 30 years ago, he was astonished that an airport worker recognized his last name.

It was a striking experience for a young man — and future American president — struggling to understand how a country he had never seen and a Kenyan family he barely knew had shaped his identity.

“My name belonged and so I belonged, drawn into a web of relationships, alliances, and grudges I did not yet understand,” Obama wrote in his memoir, “Dreams From My Father,” about the airport encounter.

This week, Obama will make his first visit to Kenya as U.S. president, a trip that will bear little resemblance to the 1988 one, when he arrived aboard a commercial flight and his luggage got lost. Now, Air Force One will take Obama to a country where children, roads and schools now bear his name, and the world leader is seen as a local son.

Yet traveling with the trappings of the presidency appears likely to diminish the fulfillment of a trip to his father’s homeland.

“I’ll be honest with you, visiting Kenya as a private citizen is probably more meaningful to me than visiting as president because I can actually get outside of a hotel room or a conference center,” he said last week, adding that his trip still would be “symbolically important.”

Security concerns and the logistics of presidential travel kept Obama at a distance from most Kenyans. He skipped a visit to Kogelo, the rural village in western Kenya where his father was born and buried, and where his stepgrandmother and other family members still live.

Obama’s two days of events were confined to Nairobi, the capital where he met with Kenyan President Uhuru Kenyatta, attend the Global Entrepreneurship Summit, and speak to civil society leaders. On Sunday, he went to Ethiopia.

Despite the limits on Obama’s movement and interactions with the Kenyan people, his visit is highly anticipated in the East African nation. Even as a U.S. senator, he was greeted by cheering crowds when he made his last visit to Kenya, in 2006.

Ahead of Obama’s arrival Friday, some Kenyans have adopted a rousing segment of an Obama speech as their cellphone ringtone. U.S. and Kenyan flags lined the road leading from Nairobi’s main airport.

Obama’s visit is like “a brother coming back,” said Nelly Ngugu, customer relations manager at a Nairobi cafe.

Before Obama’s travel plans were announced, there had been some disappointment that the U.S. president who has written and spoken emotionally of his Kenyan roots had not returned since taking office. Analysts questioned whether America’s first black president was missing an opportunity to give Africa more prominence in U.S. foreign policy.

Much of Obama’s international focus in his first term was on strengthening ties with Asia and trying to reset U.S. policy in the Middle East. His only visit to sub-Saharan Africa during his first four years in office was a short stop in Ghana.

At the time, there was persistent and inaccurate speculation that he was born in Kenya, not the United States. Some political opponents tried to use the rumors to undercut Obama’s eligibility for president. As late as 2011, a CBS/New York Times poll showed that one-quarter of all Americans believed Obama was not born in the U.S.

Obama’s re-election raised renewed hopes for a visit to Kenya, but the political situation there complicated those plans.

Kenyatta, the son of the country’s first president, was elected president in 2013, but faced charges in the International Criminal Court stemming from his alleged role in stoking ethnic violence following Kenya’s troubled 2007 election.

“The timing was not right for me as the president of the United States to be visiting Kenya when those issues are still being worked on and, hopefully, at some point resolved,” Obama said of his decision to pass over Kenya in favor of South Africa, Tanzania and Senegal during a 2013 trip to Africa.

The charges against Kenyatta were ultimately dropped, clearing the way for Obama to finally visit his father’s home country as president. The earlier disappointment faded, overtaken by anticipation and national pride.

In Kogelo, the Obama family’s home village, the family’s aging matriarch said even she would not feel bad if the president did not visit her. Sarah Obama, who Obama referred to as “Granny” in his memoir, said the president was coming to Kenya “to discharge his duty.

“He is a son here,” said the elder Obama, who was the second wife of the president’s grandfather. “I cannot be angered by him not coming to see me.”