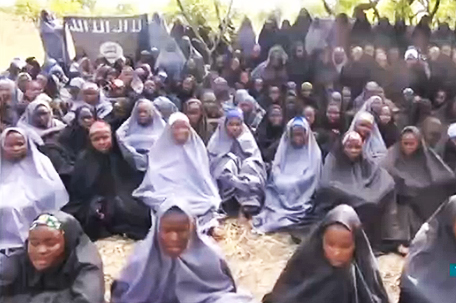 ABOVE PHOTO:  In this video grab from Touchvision it is believed that these are the abducted Nigerian teen girls.

Obama, in a letter to House Speaker John Boehner and the Senate, notified lawmakers about the latest steps underway to assist in the return of the abducted girls.

Obama said the service members will help with intelligence, surveillance and reconnaissance aircraft for missions over northern Nigeria and the nearby region. He says the force will stay in Chad until its support is no longer necessary.

Chad shares a portion of its western border with northeastern Nigeria.

According to Lt. Col. Myles Caggins, the 80 U.S. military personnel will help expand drone searches of the region. About 40 of the troops make up the launch and recovering teams for the drone being deployed there and the other 40 make up the security force for the team. Caggins said this latest deployment will not involve ground searches by the troops.

A senior U.S. official said the drone is a Predator, and will be in addition to the unarmed Global Hawks already being used. The new flights will be based out of Chad and allow the military to expand its search to that country. Initially the flights were largely over Nigeria.

The official was not authorized to discuss the matter publicly so spoke on condition of anonymity. The Predator also replaced the manned Liberty aircraft that was being used for search flights, but was pulled out for maintenance.

The girls and young women, all from a school in northern Nigeria, were kidnapped last month by an Islamic extremist group known as Boko Haram. Dozens escaped, but the group’s leader has threatened on video to sell most of the remaining 276 schoolgirls into slavery if the government does not release detained militants.

The government of Nigerian President Goodluck Jonathan came under intense criticism for an initial slow response to the kidnappings. Since then, the international community has pledged its assistance.