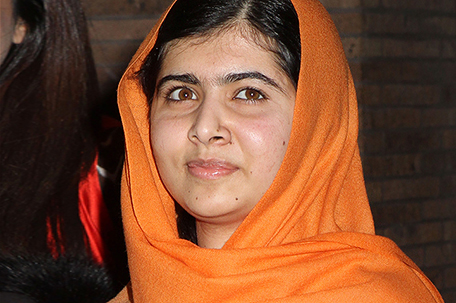 OSLO, Norway — Nobel Peace Prize winners Malala Yousafzai from Pakistan and Kailash Satyarthi of India on Tuesday stressed the importance of uniting people across borders and religions by educating children and freeing them from poverty.

The 17-year-old Malala, who was shot in the head two years ago in Pakistan for insisting that girls have as much right to education as boys, says it is “not only the right but the duty of children” to be educated.

Sitting alongside Malala, the youngest Nobel winner ever, the 60-year-old Satyarthi told their news conference that even if a single child is denied education “we cannot say we are enlightened.”

The Nobel laureates, who split the $1.1 million award, were cited for working to protect children from slavery, extremism and child labor at great risk to their own lives. They reiterated that the prize was not only for them but for all the children of the world.

Malala said she is disappointed that the prime ministers of their two rival nations have not accepted her recommendation to attend the award ceremony in Oslo on Wednesday, the anniversary of Alfred Nobel’s death in 1896.

“Countries do have borders. It doesn’t mean that you should hate each other,” she said. “If they were here, I would have said to them to make education the priority together.”

The visit by Malala and Satyarthi has drawn hundreds of people into the freezing streets of Oslo hoping to get a glimpse of the laureates.

Martin Slotnes, a Norwegian living in Australia who was visiting the city with his wife and children, said it was the first time he had taken an interest in the peace prize.

“Her story moves me,” he said of Malala, after showing his sons the picture he snapped of her from behind the barricade. “It was bitter cold, but it was worth it.”