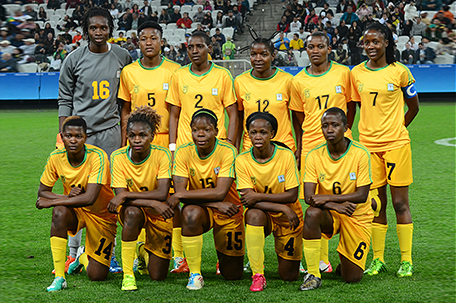 BINDURA, Zimbabwe — Felistas Muzongondi used to be a house cleaner. She’s now an office clerk for a sugar manufacturer, and also the captain of the Zimbabwe women’s soccer team at the Olympics.

If you need a reminder that the Olympics are about more than just riches and rewards, then the Zimbabwean soccer team is one of the starkest in Rio de Janeiro.

“Apart from the joy of qualifying for the Olympics, the biggest feat was showing what we can do as women in this country,” Muzongondi said. “I don’t think before this achievement we had the recognition we deserved as women footballers in this country, and women’s football in general.”

Paid only $20 a day each when on national team duty, and just $50 each for playing in a match, it’s no wonder the Zimbabwean players all have day jobs.

Until recently, they didn’t have their own uniforms, making do with cast-offs from the men’s national team. Their pre-Olympic training camp was at a university campus where they slept in dorm rooms usually occupied by students and ate plain food served up in the college’s dining hall. The training equipment was basic.

Even Zimbabwean officials have been of little help, and instead jeopardized the team’s chances of making the Olympics because they didn’t provide enough money to fly the squad to a qualifier in Ivory Coast, forfeiting that game.

Somehow, the Zimbabwe team still made it to Rio, battling through all these issues and more to now rub shoulders with the best in the world. They are the first soccer team — men or women — from Zimbabwe to qualify for the Olympics. The women’s game back home is severely underfunded and neglected, Muzongondi said.

Determined to make the federation take notice of them and respect them, the players went on strike in the buildup to the Olympics to demand better wages and treatment.

“Financially we struggle more than the men, yet we have done what no other Zimbabwean team has managed to do,” Muzongondi said. “We are looked down upon as women footballers.”

Zimbabwe lost to Germany 6-1 and to Canada 3-1 in its first two matches in Rio and plays its final group game against Australia on Tuesday. But forget those scores and concentrate, rather, on the fact that Zimbabwe is ranked No. 93 in the world and still made it to the top 12 teams in the world.

They left their mark on other teams, too. Canada coach John Herdman said he showed his players newspaper reports on how the Zimbabweans had faced up to adversity. One of the stories told of how the Zimbabwe team, known as the Mighty Warriors, scrambled together $100 to pay for a medical scan for one of the players.

And there’s Muzongondi’s personal story, too.

She left Zimbabwe and its ruined economy for neighboring South Africa looking for work. She found a job as a house cleaner but it didn’t pay enough and she packed her bags and got back on a bus for home, committing as much as she could to soccer this time while making ends meet at the sugar manufacturer.

Money aside — the players got another $50 each for making soccer history for their country and qualifying for the Olympics — Muzongondi thinks they have earned something important.

“Now everyone in the country is talking about the Mighty Warriors,” she said. “To us, that’s the greatest thing we have achieved — recognition.”