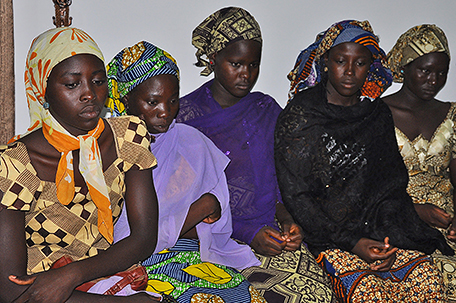 ABOVE PHOTO:  Some of the escaped Kidnapped girls of the government secondary school Chibok. (AP Photo/Jossy Ola)

LAGOS, Nigeria — Nigeria’s military says it has no news of the more than 200 schoolgirls kidnapped by Islamic extremists nearly a year ago, despite liberating dozens of towns from the girls’ Boko Haram abductors.

The admission of lack of progress on the missing schoolgirls comes as the Nigerian military, bolstered by forces from neighboring countries, is regaining towns and cities held by Boko Haram in northeastern Nigeria. The military’s successes come as Nigeria prepares for a critical presidential election on March 28.

Other kidnap victims have escaped and some have been freed by the militants, but there has been not a whisper about the girls whose mass abduction spawned the #BringBackOurGirls campaign and provoked protests around the world.

“No news for now because in all the liberated areas we have, we have also made enquiries, but the truth is, when the terrorists are running away, they run also with their families,” army chief Lt. Gen. Kenneth Minimah told reporters on Tuesday.

“We are optimistic that … we will get further details on them” as Boko Haram’s area of influence shrinks, Minimah said in Abuja, Nigeria’s capital.

The military this week “liberated completely” the two northeastern states of Yobe and Adamawa from the extremists, said Minimah. He said Boko Haram now holds only three of 27 local government areas in Borno, the third northeastern state under a military state of emergency and the birthplace of Boko Haram.

On Monday, the military said it had recaptured Bama, the second city of Borno state, as it prepares a final assault against the extremists. The victories, after years of failure, follow an offensive launched at the end of January by troops from Chad.

Despite the lack of news on the schoolgirls, Nigeria’s President Goodluck Jonathan, currently campaigning for re-election in a tight race against former military dictator Gen. Muhammadu Buhari, has repeated promises to bring the girls back alive.

“I am more hopeful now than before on the Chibok girls,” Jonathan told a televised media chat on Feb. 5. But unconfirmed reports indicate that many of the schoolgirls may have been forced into marriage with their captors, some carried across Nigeria’s borders and at least three died early on from snakebites and untreated malaria and other ailments.

However Jonathan says he remains optimistic.

“I believe that the story of the Chibok girls will be better, now that we are working with Niger, Cameroon and Chad,” he said, referring to a new regional army of 8,750 troops to fight Boko Haram as the militants carry their conflict over Nigeria’s borders in their bid to recreate an ancient Islamic caliphate.

More than 1.5 million people driven from their homes by Boko Haram’s nearly 6-year-old Islamic uprising. Some 10,000 people were killed in the uprising just last year, according to the Washington-based Council on Foreign Relations.

Some 276 girls were snatched before dawn from the government boarding school in Chibok on April 15. Dozens escaped in the first couple of days. But 219 remain missing.

A spate of recent suicide bombings carried out by young women and girls has raised fears that Boko Haram is using kidnap victims to increase its deadly toll.

In videos, Boko Haram’s leader has said that girls should be married off, not educated. The group’s nickname means “Western education is sinful.”

In early February, Nigeria’s air force began bombarding the Sambisa Forest, a stronghold of Boko Haram where the Chibok girls first were taken. Last year, the military said it could not bomb the forest or launch a ground offensive for fear the girls would be harmed.

“Are these girls going to be collateral damage? It is very, very sad,” said Hussain Monguno, a community leader in the Borno-Yobe People’s Forum told The Associated Press after the bombing started. “As the days go by, the possibility of getting them back becomes very bleak.”

Restless nights have been the lot of the Rev. Enoch Mark, a pastor with the Church of the Brethren whose two daughters are among the kidnapped girls. He said he is in hiding because he has become a wanted man by Boko Haram because of his role as a spokesman for parents of the Chibok girls.

“I have been spending the nights sleeplessly worrying about what condition my daughters might be in,” Mark told AP by telephone. “I am so disturbed, thinking of my daughters, thinking of the other Chibok girls.”