Nigerian group to U.S.: Give assets to charities 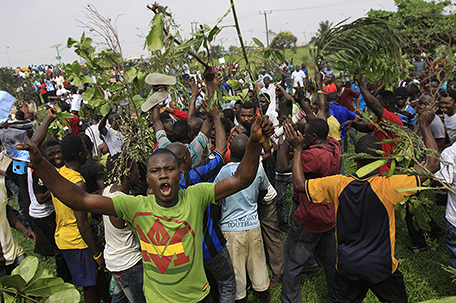 ABOVE PHOTO:  In 2012, people protest against government corruption and the removal of a fuel subsidy, in Lagos, Nigeria, Monday, Jan. 9, 2012.   (AP Photo/Sunday Alamba, File)

LAGOS, Nigeria– A leading Nigerian rights group is urging the U.S. government to give nearly half a billion dollars in assets frozen from a corrupt dictator to charities instead of the Nigerian government.

That would help see the money is used to improve the lives of the people from whom it was stolen and could help unblock billions more banked by deceased Gen. Sani Abacha and held by countries reluctant to return it, said the group.

“There is a strong probability that the money will be re-stolen” if the frozen funds are returned to the Nigerian government, Adetokunbo Mumuni, executive director of the Socio-Economic Rights and Accountability Project told The Associated Press on Thursday. Delays perpetuate the corruption, he said, “Otherwise what we have is a vicious cycle of corruption, poverty and of course impunity of perpetrators.”

U.S. lawyers for his organization on Wednesday asked the U.S. attorney general to publish a proposal to dispose of more than $458 million in assets frozen by the U.S. Justice Department last month as corrupt proceeds in the name of Abacha, a son who is a Nigerian politician and an associate who is now a federal senator.

The petition suggests the Department of Justice consider the integrity of the Nigerian government and its anti-corruption safeguards and asks “under what circumstances the department would prefer to repatriate such funds to a charitable organization for public benefit purposes, e.g. health care, in the victim country.”

It suggests giving the money to Nigerian charities or U.S. charities working in this country.

Repatriation of frozen assets is not automatic, said one of the rights project’s pro-bono lawyers, Alexander W. Sierck of Washington D.C.-based Cameron LLP. “The U.S. Department of Justice has substantial discretion here, both as to whether to repatriate and to whom,” he told the AP in an email.

Nigerian and foreign human rights organizations charge that some of the $505.5 million dollars repatriated from Swiss banks holding Abacha’s funds already have been misused.

“Almost half of the money that was sent out disappeared once again,” said Olivier Longchamp of Switzerland’s Berne Declaration advocacy group. He said not all the money was necessarily stolen, but it could not be tracked.

The Berne Declaration in November published a report accusing two Swiss commodity traders and the state-controlled Nigerian National Petroleum Corp. of defrauding Nigeria’s government of some $6.8 billion from oil sales between 2009 and 2011.

Such allegations explain the years-long delays since Nigeria launched a high-profile campaign for the return of looted funds in 1999, when democratic elections ended decades of military dictatorship. It did not, however, halt the corruption that keeps tens of millions of Nigerians mired in poverty while a small elite enjoys fabulous wealth in Africa’s biggest oil producer.

President Goodluck Jonathan’s administration is embroiled in the biggest corruption scandal ever to hit this country awash in graft: charges by suspended Central Bank Gov. Lamido Sanusi that some $20 billion in petroleum revenues is missing.

Mumuni’s organization two years ago asked the U.S. Securities and Exchange Commission to consider repatriating civil fines paid under the Foreign Corrupt Practices Act to charities “in the event that the SEC determined not to pay such proceeds directly to the government where officials were apparently bribed.”

Mumuni said no one knows exactly how much has been frozen of the estimated $5 billion stolen by Abacha, who ruled from 1993 to 1998. Other reported seizures include $630 million in Luxembourg, $450 million in Britain and $185 million in Liechtenstein.