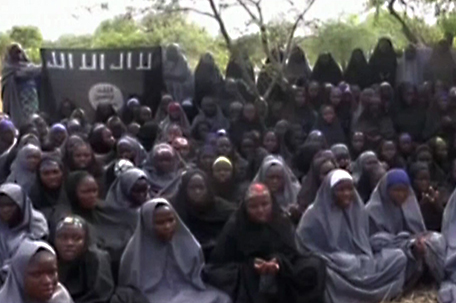 Nigeria — With a malevolent laugh, the leader of Nigeria’s Islamic extremists tells the world that more than 200 kidnapped schoolgirls have all been converted to Islam and married off, dashing hopes for their freedom.

“If you knew the state your daughters are in today, it might lead some of you … to die from grief,” Abubakar Shekau sneers, addressing the parents of the girls and young women kidnapped from a remote boarding school more than six months ago.

In a new video released late Friday night, the Boko Haram leader also denies there is a cease-fire with the Nigerian government and threatens to kill an unidentified German hostage.

“Don’t you know we are still holding your German hostage (who is) always crying,” he taunts. “If we want, we will hack him or slaughter him or shoot him.”

A German development worker was kidnapped at gunpoint in Gombi, a town in Nigeria’s northeast Gombi in July. Police reported he was ambushed as he drove to work.

Germany’s Foreign Minister Frank-Walter Steinmeier last week told reporters in Abuja, Nigeria’s capital, that he had no new information about a German abductee.

In the new video, Shekau wears a camouflage tunic and pants and the black and white flag of al-Qaida is by his side. He is flanked by masked and armed fighters standing in front of four military pickup trucks mounted with anti-aircraft guns. Boko Haram has looted many weapons and vehicles including armored cars from Nigeria’s military.

The military has several times claimed to have killed Shekau, and says any new videos are made by a look-alike. But the United States has not removed a $7 million ransom on the head of the extremist leader.

On Oct. 17, Nigeria’s military chief, Air Chief Marshal Alex Badeh, announced that Boko Haram had agreed to an immediate cease-fire to end a 5-year insurgency in which thousands have died and hundreds of thousands have been driven from homes in northeast Nigeria. And government officials said they expected the Chibok girls to be released any day.

But Shekau denies in the video that he has agreed to any truce and says he is dedicated to fighting and dying a martyr’s death to guarantee him a place in paradise.

“You people should understand that we only obey Allah, we tread the path of the Prophet. We hope to die on this path … Our goal is the garden of eternal bliss,” he says.

He said Boko Haram is interested only in “battle, hitting, striking and killing with the gun, which we look forward to like a tasty meal,” he said.

The fighting and abductions have continued, with Boko Haram seizing the commercial center of Mubi this week and fighting raging Friday around nearby Vimtin, the village where Badeh was born.

And the only news of the girls has come from Shekau, who appeared to dash hopes that they would be released in an exchange for detained Boko Haram fighters.

“The issue of the girls is long forgotten because I have long ago married them off,” Shekau says with a chortle. The extremist fighters have ordered girls to stay out of Western-style schools and get married. Boko Haram is a nickname meaning “Western education is sinful” in the Hausa language.

An earlier video in May showed some of the kidnapped girls, including two explaining why they had converted to Islam. Unconfirmed reports have indicated the girls have been divided into groups and that some have been carried across borders, into Cameroon and Chad. There also have been reports that they were forced to marry fighters who paid a nominal bride price equivalent to $12.

Some 276 girls and young women were kidnapped in the early hours of April 15 from a boarding school in the remote town of Chibok. Dozens escaped on their own in the first couple of days but 219 remain missing.

The plight of the girls attracted international outrage, with demands that Boko Haram free them. The Nigerian government and military’s failure to secure their release has brought criticism that President Goodluck Jonathan is uncaring of their fate.

Shekau in August announced that Boko Haram wanted to establish an Islamic caliphate, along the lines of the IS group in Syria and Iraq. Fleeing residents have reported that hundreds of people are being detained for infractions of the extremists’ version of strict Shariah law in several towns and villages under their control.

Shekau’s video announcement further discredits the government of President Goodluck Jonathan, a Christian southerner who on Thursday formally announced his candidacy for elections on Feb. 14, 2015, in Africa’s most populous nation. Nigeria’s 160 million people are divided almost equally between Muslims who dominate the north and Christians in the south. The West African nation is the biggest oil producer on the continent and has its biggest economy.