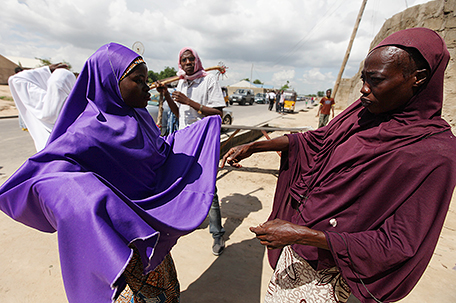 ABOVE PHOTO:  In this photo from 2013, Habiba Saadu, right, 48, a member of the vigilante force dubbed the Civilian JTF, searches a woman under her veil at a check point in Maiduguri, Nigeria. In an area of Nigeria where an Islamic insurgency has caught fire, security forces are carrying out night raids in residential neighborhoods and have arrested many people. Saadu’s two sons and her daughter were taken last August by soldiers who went from house to house in a night raid in Maiduguri, the capital of Borno state, accusing them of participating in the uprising by Boko Haram, an armed Islamic group that has been waging a bloody war in Africa’s most populous nation for four years.  (AP Photo/Sunday Alamba, File)

By Haruna Umar and Adamu Adamu

BAUCHI, Nigeria — Villagers in an area of Nigeria where Boko Haram operates have killed and detained scores of the extremist Islamic militants who were suspected of planning a fresh attack, the residents and a security official said.

Residents in Nigeria’s northern states have been forming vigilante groups in various areas to resist the militants who have held more than 270 schoolgirls captive since last month.

In Kalabalge, a village about 250 kilometers (155 miles) from the Borno state capital of Maiduguri, residents said they were taking matters into their own hands because the Nigerian military is not doing enough to stem Boko Haram attacks.

On Tuesday morning, after learning about an impending attack by militants, locals ambushed two trucks with gunmen, a security official told The Associated Press. At least 10 militants were detained, and scores were killed, the official said, speaking on condition of anonymity because he is not authorized to give interviews to journalists. It was not immediately clear where the detainees were being held.

Kalabalge trader Ajid Musa said that after residents organized the vigilante group, “it is impossible” for militants to successfully stage attacks there.

“That is why most attacks by the Boko Haram on our village continued (to) fail because they cannot come in here and start shooting and killing people,” he said. Earlier this year in other parts of Borno, some extremists launched more attacks in retaliation over the vigilante groups.

Borno is where more than 300 girls were abducted last month and one of three Nigerian states where President Goodluck Jonathan has imposed a state of emergency, giving the military special powers to fight the Islamic extremist group, whose stronghold is in northeast Nigeria.

Britain and the U.S. are now actively involved in the effort to rescue the missing girls. U.S. Attorney General Eric Holder said FBI agents and a hostage negotiating team are in Nigeria now, providing technology and other materials and working with “our Nigerian counterparts to be as helpful as we possibly can.” U.S. reconnaissance aircraft are flying over Nigeria in search of the missing girls.

The group kidnapped the girls on April 15 from a school in Chibok. At least 276 of them are still held captive, with the group’s leader threatening to sell them into slavery. In a video released on Monday, he offered to release the girls in exchange for the freedom of jailed Boko Haram members.

A Nigerian government official has said “all options” are now open – including negotiations or a possible military operation with foreign help.

Jonathan this week sought to extend the state of emergency for six more months in the states of Yobe, Adamawa and Borno.

That move is being opposed by some leaders in northern Nigeria who say the emergency measure has brought no success. Yobe Governor Ibrahim Gaidam said in a statement received Wednesday that his government “takes very strong exception” to attempts to extend the state of emergency – a period that he described as “marked more by failure than by success.”

During this period Nigerian government forces have been accused of committing rights abuses, charges denied by the military, and the threat from Boko Haram has appeared to intensify.

Linda Thomas-Greenfield, the top State Department official for Africa, said in a web chat Wednesday that “part of our work with the (Nigerian) government is to help train members of their security how not to commit human rights violations.”

Boko Haram has killed more than 1,500 people this year. Although the security forces have forced the militants out of urban centers, they have struggled for months to dislodge them from hideouts in mountain caves and the Sambisa forest.

Last week, as world attention focused on the abducted schoolgirls, Islamic militants attacked the town of Gamboru, in Borno state, and killed at least 50 people, according to residents. A senator from the area has said up to 300 were killed in that attack.