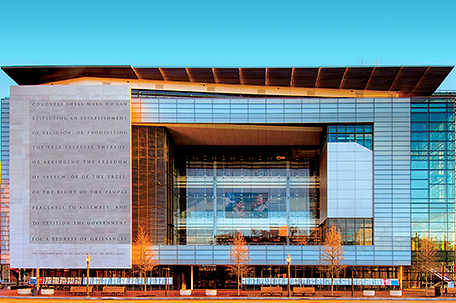 WASHINGTON —  Last week, the Newseum opened “1967: Civil Rights at 50,” which explores the civil rights events of 1967, when Black Americans used their First Amendment freedoms to challenge police brutality, economic inequality and the Vietnam War amid deadly riots and the rise of the Black Panther Party. It was a critical year in the long and continuing struggle for equality that continues to roil American society. “1967” is part of an annual changing exhibit that explores the relationship between the First Amendment and the Civil Rights Movement of the 1960s.

Through powerful photos and images, the exhibit captures events the year after Black Power activists reshaped the Civil Rights Movement with fiery demands for empowerment and racial pride. In 1967, many Black Americans were electrified by new calls to fight back against oppression. That summer, simmering tensions in cities struggling with inequality, poverty and police violence exploded in the deadliest rioting of the 1960s.

The exhibit examines the Black Panther Party and its move to channel anger into radical action, positioning the group as the new vanguard of the struggle for racial justice. Other key events include the scathing speech in April 1967 by civil rights leader Martin Luther King Jr., who criticized the costly Vietnam War for undermining the fight against poverty at home, and the refusal of outspoken heavyweight boxing champion Muhammad Ali to enlist in the U.S. Army. A Muslim, he cited religious reasons for seeking conscientious objector status. The year also saw the deadliest rioting of the decade erupt in cities from Detroit to Newark, New Jersey. There were also signs of positive change that year, as Thurgood Marshall became the first Black Supreme Court justice, and a landmark Supreme Court ruling banned laws against interracial marriage.

“1967: Civil Rights at 50” is a companion exhibit to “Make Some Noise: Students and the Civil Rights Movement,” which opened at the Newseum in August 2013. The exhibit features a section of the original F.W. Woolworth lunch counter in Greensboro, North Carolina., where in 1960 four  college students launched the sit-in movement, and a bronze casting of the Birmingham, Alamaba., jail cell door behind which Martin Luther King Jr. penned his famous “Letter From Birmingham Jail” in 1963.

Teachers and students can supplement their on-site learning with a free online resource from NewseumED. The website features an EDCollection called “Making a Change,” which explores the Civil Rights Movement through the lenses of historical connections, media literacy, civics and citizenship using videos, archival news footage and interviews. These standards-aligned lesson plans will help teachers enhance student engagement with Newseum content, their communities and their peers across the country.

Contributing support for “1967: Civil Rights at 50” has been provided by Altria Group.