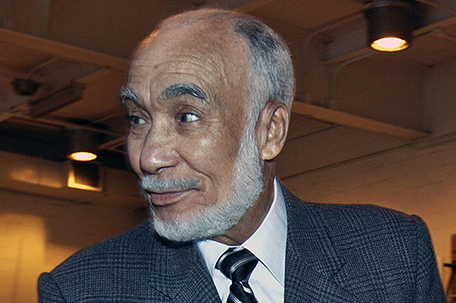 NEW YORK — Basil Paterson, a longtime New York political powerhouse and the father of former Gov. David Paterson, has died, his family said Thursday. He was 87.

Paterson died at 10 PM last Wednesday at Mount Sinai Hospital, according to a family statement that did not give the cause of death. He would have turned 88 on April 27.

The Democrat served as a state senator, deputy New York City mayor and New York’s first black secretary of state. He was part of the influential “Gang of Four” that included New York City’s first black mayor, David Dinkins, political powerbroker and civil rights activist Percy Sutton, and U.S. Rep. Charles Rangel. They built a power base that made Harlem a launching pad for the state’s black leadership and opened doors for African-American businesses.

“I feel a tremendous personal loss,” Dinkins said. “He was a dear friend for a long time.”

“He did so much for so many of us … He’ll be remembered as a very, very smart guy who cared about his community,” added Dinkins, who said he had visited Paterson at the hospital.

Rangel said Paterson recently had heart surgery and had suffered some health setbacks in the last few years. The congressman said he visited him at the hospital several weeks ago and that he appeared strong as the two spoke about the future of New York and the country.

“I’ve never heard an unkind word about Basil Paterson in the over 60 years that I’ve known him,” Rangel said.

In the 1960s, Paterson served in the state Senate, representing the Upper West Side and Harlem. He gave up his seat in 1970 to run for lieutenant governor, a race he lost. He served briefly as deputy mayor in the Ed Koch administration before being appointed as New York’s secretary of state in 1979, a post he held until 1983. From 1989 to 1995, he served as commissioner of the Port Authority of New York and New Jersey.

Despite Paterson’s extensive list of accomplishments, Rangel said his friend is best known for being “a real decent fellow,” adding that it’s uncommon for a politician and trade union negotiator to have such a gleaming reputation.

“Basil Paterson exemplified a model of public leadership, serving the people of New York with integrity and dedication to make this state a better place,” Gov. Andrew Cuomo said in a statement. “His legacy inspired a new generation of talented public leadership, a legacy his son Gov. David Paterson carried on as governor.”

In later years, Paterson worked at the law firm of Meyer, Suozzi, English & Klein specializing in labor law. He also taught at the State University of New York at New Paltz, Fordham University and Hunter College.

“New York City has lost a progressive giant who committed his life to lifting up others,” Mayor Bill de Blasio said in a statement, adding that he sought Paterson’s advice in the 20 years he worked with him.

“Basil was well known throughout the community as a man of action, as someone who set his mind to accomplishment and always met those goals,” the family’s statement said. “He was a selfless leader and he dedicated his life to making sure others’ lives were better.”

The family did not release funeral arrangements.