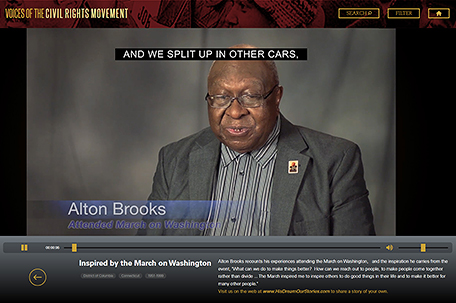 WASHINGTON — The Newseum, in partnership with Comcast NBCUniversal, recently unveiled “Voices of the Civil Rights Movement,” a new interactive kiosk that features stories and interviews with leaders of the struggle for equal rights. The videos in the kiosk are part of Comcast NBCUniversal’s “His Dream, Our Stories” project, a collection of historical narratives and firsthand accounts of the civil rights movement from activists, participants, community leaders, elected officials and others.

Included in the new hands-on kiosk are interviews with key figures of the civil rights movement, including U.S. Rep. John Lewis, the Rev. Jesse Jackson, former U.N. Ambassador Andrew Young, the Rev. Dr. Joseph E. Lowery, the Rev. Samuel “Billy” Kyles and many more. Newseum visitors not only will experience history through the eyes of those who were there, they also will hear about key events and milestones through Comcast NBCUniversal’s collaboration with the Equal Justice Initiative — a series of 52 vignettes called “Moments in Civil Rights History.” The series is narrated by the late civil rights activist Judge D’Army Bailey.

“We’re honored to partner with Comcast, a longtime supporter of the Newseum, to preserve and present to the public these important voices of history,” said Jeffrey Herbst, president and CEO of the Newseum. “The legacy of the civil rights movement shows that through steadfast, peaceful exercise of the freedoms granted by the First Amendment, change is possible.”

The kiosk is located at the entrance to “Make Some Noise: Students and the Civil Rights Movement,” a civil rights exhibit that opened at the Newseum in 2013.

“Comcast and NBCUniversal created the ‘His Dream, Our Stories’ project to chronicle the lives and experiences of those who fight for equality for all people,” said David L. Cohen, senior executive vice president of Comcast Corporation. “We’re especially proud to have this compelling content about the fight for civil rights become a dedicated part of the Newseum during the 50th anniversary of the historic Voting Rights Act.”

The “Make Some Noise” exhibit features a section of the original F.W. Woolworth lunch counter from Greensboro, N.C., where in 1960 four African American college students launched the sit-in movement, and a bronze casting of the Birmingham, Ala., jail cell door behind which the Rev. Martin Luther King Jr. penned his famous “Letter From Birmingham Jail” in 1963.