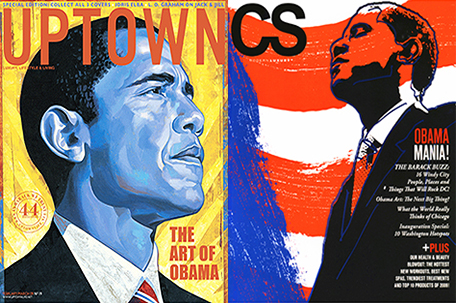 As President Barack Obama prepared for his farewell speech in Chicago, thoughts turned to his legacy. A new photography book captures his story by compiling eight years of his best newspaper and magazine covers.

On the night of November 4, 2008, author Ben Arogundade was in New York’s Times Square to witness Obama’s historic victory as the country’s first African American president. To commemorate the event, he began collecting the following day’s newspapers and magazines featuring the new leader. By 2016, he had hundreds of examples from around the world, all preserved in polythene jackets, each rendition contributing to the visual diary of Obama’s eventful tenure in the White House.

Eight years in the making, ‘Obama: 101 Best Covers’ curates the best moments from these front pages. The collection showcases the finest in visual storytelling from the world’s premier print titles. The accompanying text discusses the design, typography, photography and political context of each cover, bringing to life this unique portrait of the world’s most famous man.

Ben Arogundade is a London-based writer, designer and entrepreneur. His background spans architecture, graphic design, journalism and publishing. His first book, ‘Black Beauty’ – an exploration of society’s historical perceptions of the black image — was the subject of a three-part BBC documentary. In 2016 Ben launched his own publishing imprint, White Labels Books. ‘Obama: 101 Best Covers’ is its debut release.

Available online at www.whitelabelsbooks.com and www.amazon.com

For further info, or to interview Ben Arogundade, send an email to [email protected].

Obama’s Legacy: What He Accomplished as President