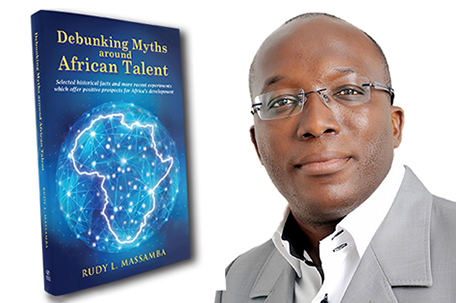 Nationwide — Black people tend to think that their “present” is chaotic, because their “past” was not glorious. Without a bright past, as well as a bright present, most people from the African continent are convinced that they have no future unless they are guided by other races, mainly the White race.

“Debunking Myths Around African Talent” by Rudy L. Massamba brings forth much needed truth about the role and importance of African inventors, and ties the historical role and accomplishments of ancient African innovators and inventors to contemporary African inventions.

Why is there a negative perception about African inventors?

This perception or belief is due to the fact that the Blacks were indoctrinated through the educational system in Africa and in the Western world. This perception is what the author refers to as “The Mental Destruction of Black People” which stems from slavery and colonization.

“Debunking Myths Around African Talent,” available on Amazon, reminds us that Africa’s true history is exceptional; a reality that the Western World has methodically tried to erase or occult in the world’s collective consciousness. The unfortunate consequence of this denial is that claiming lies as truths about Black people, using powerful media, made these lies become truth for humanity!

Can this trend be reversed?

According to the author, this perception can be reversed if there is a paradigm shift within the educational system that will bring about a mind shift. This implies that black people in Africa, America, etc. become in charge of their education so as to restore historical facts from Ancient times to present – as no other people can really be expected to do it for them.

Massamba comments, “The grandeur of the Black race rests on the bosom of the African continent – cradle of humanity.” This is, undeniably, the subliminal message conveyed by the author. “Until Africa rises as a Super Power, black people will have to keep on proving, to the world, that they have talent. While this should not be the case, as they have always had talent,” he adds.

In a world of negativity, this book finally attempts to offer positive motivation for the invention of great things that will propel Africa into the industrial and economic arena as a force to be reckoned with – thanks to the plurality of contemporary African inventors, among others. Indeed, some of these inventors and their inventions are portrayed and grouped in 7 industrial sectors. However, most of them are not yet truly appreciated by Africans themselves; thus the author’s attempt to value and celebrate the African genius.

Rudy L. Massamba is enthusiastic about Africa’s development and writes in English and French. Thus, a new edition of his first book L’Afrique Noire Industrielle (French only) was released on September 2017. He’s also the founder of KUMATOO, which is a platform that enables African inventors (from Africa and the diaspora) to exhibit virtually their inventions and innovations.