Nelson Rolihlahla Mandela’s 2018 Centenary Celebration: Be the Legacy (part one) 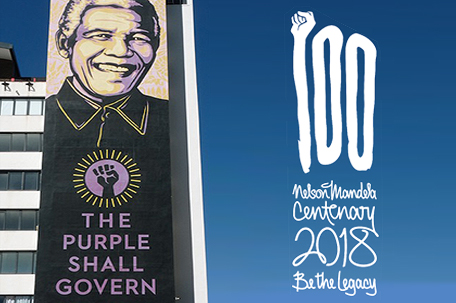 Nelson Mandela, widely referred to by his tribal honorific, Madiba, would have been 100 this year.

South Africa and the world have taken this opportunity to commemorate his life and legacy with a series of ongoing events, exhibitions and performances that are designed to serve as examples of and foster a more inclusive society that promotes diversity and social justice. Active participation and interaction is encouraged so that participants gain a deeper understanding of the values Mandela esteemed. The “Madiba’s Journey” application is an outstanding tool that includes maps, narratives and additional practical information.  (www.madibasjourney.southafrica.net)

Sites and activities offered throughout the country are accessible and clearly marked. They give travelers an opportunity to learn more about the Republic of South Africa and how Mandela’s legacy has impacted the country. Great care has been taken to include the individuals who mentored and influenced Madiba, beginning with his parents, on his journey. On the eve of Mandela’s birthday, July 17th, former President Barack Obama will deliver the Nelson Mandela Annual Lecture in Johannesburg. (@visitSouthAfrica)

The 471,008-square mile South Africa is stunning. It is bordered by two oceans — the Atlantic and the Indian — and has 1,836-miles of coastline. There are eight UNESCO sites, one of which is considered the “Cradle of Humankind,” a Hominid fossil site with artifacts that date back 3-million years. The “Out of Africa” theory is based on findings in the Sterkfontein Caves and more than 10 other sites exhibiting numerous bones. (www.thecradleofmankind.net)

The country is a large producer of chrome, platinum and vanadium. It is also known for the diamonds mined there; the Kimberley Mine alone has produced 14.5 million carats. Because of the country’s abundance, European settlers honed in on what they felt was free land for the taking, eventually marginalizing the native Africans (Bantus) and establishing a system of segregation in 1910 that led to the founding of the African National Congress (ANC) in 1912. The system was  legalized as apartheid in 1950 and the Group Areas Act demanded that nearly 2-million Africans be removed from cities and made to live in poverty in white controlled townships. It is into this country of vast, unequal wealth and potential that Nelson Mandela was born on July 18, 1918, educated and set out on his “Long Walk to Freedom.” 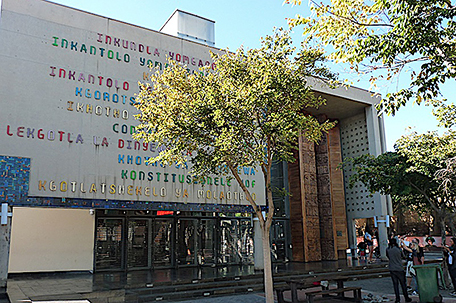 Johannesburg is rife with locations, monuments and memorials connected with Mandela’s struggles and offers the best opportunity to gain an overview of Madiba’s journey, the country’s history and the people and cultures involved. It was his first home after leaving his ancestral homeland and his final home. He died there on December 3, 2013. (#meetSouthAfrica)

His final home is not open to the public but can be viewed from the exterior. Nearby,  the Nelson Mandela Centre of Memory is a reservation only museum displaying personal items. His first home, at the age of 23, was a one-room rental on 7th Avenue.

“The Shadow Boxer” is a the second largest statue of Madiba in the city. It replicates a photo Mandela sparring in 1953. The sculpture’s grey and black steel plated figure is fashioned to cast shadows on the Magistrate Court behind it. Across from the statue is the Chancellor Building and the Mandela & Tambo Law Office where Nelson and Oliver Tambo opened the first firm run by Black partners in 1952. It closed in 1960 when the two were accused of treason. It is now a museum with the exhibits in the windows.

The South Western Townships (Soweto), the most recognized of the townships, was first settled in 1891. In 1948, the government began forcing Black Africans out of Johannesburg and into Soweto, situated on polluted land. There were no public services and houses could not exceed four rooms of equal size. Streetlights were not installed until 2010 in the township of 15 million inhabitants. It was a site of protest and rebellion. Lebo’s Soweto Tours offers guided, narrated tours of Soweto’s famous sites by foot, bike or Tuk Tuk. Their outdoor restaurant serves authentic meals cooked over a fire.  (www.sowetobackpackers.com)

Vilakazi Street, the only street in the world that housed two Nobel Peace Prize winners, President Nelson Mandela and Anglican Archbishop Emeritus Desmond Tutu, is the site of the restored Mandela House. Tours showcase family personal items.  He, Winnie Madikizela-Mandela and his family lived there from 1946. Mandela returned there for 11 days after he was freed from Robben’s Island.  (www.mandelahouse.com)

Constitution Hill is a must visit. The complex features the Constitutional Court, Old Fort, Women’s Jail and Number Four. White prisoners were held in the Old Fort and in 1902 Numbers Four and Five were built to house Black prisoners. Walter Sisulu, Gandhi, and Nelson and Winnie Mandela were held here in inhuman conditions. Tours of the prison are conducted by former prisoners and include Gandhi and Madiba’s cells, vivid interpretations of prison life and the isolation cells. Do not miss this tour. (www.constitutionhill.org.za)

The Constitutional Court was opened here in 1995 by Mandela. The location was selected to represent the new South Africa linking this place of oppression with the new order. The architectural and design elements enhance the story of South Africa.

The Walter Sisulu Square of Dedication is the site of a gathering in 1955 convened to adopt the Freedom Charter that was used as a template for the modern constitution. Ten columns symbolize the charter’s clauses.

The 2002 Hector Pieterson Museum and Memorial is dedicated to 13-year old Pieterson, who was killed in the 1976 Student Uprising. The photograph of the dying Pieterson — which is displayed at the site — shows the boy being carried by another student. It gained the world’s attention and galvanized the movement.

Regina Mundi is Soweto’s largest Catholic church. It provided sanctuary for students in the 1976 protest. Police officers fired on the 4,000 students inside and a tour reveals bullet holes, a Black Madonna and stained-glass windows that depict the story. Police shot off one hand of a Christ sculpture and the congregants removed the other hand because they are now “the hands of Christ.” Michele Obama visited in 2011. (www.reginamundichurch.co.za)

The Da Vinci Hotel and Suites is a wonderful choice for following Madiba’s Trail or simply visiting the city. The location is within walking distance of important locations, restaurants and world-class shopping. The 4-star hotel offers modern amenities, on-site spa and gym and a gourmet restaurant. (www.davincihotelsuitesjohannesburg.com)