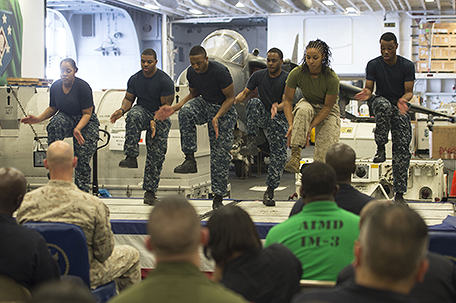 ABOVE PHOTO: Sailors and a Marine perform a step dance during the African American and Black History Month celebration aboard the amphibious assault ship USS Makin Island (LHD 8). The ship is deployed in the U.S. 5th Fleet area of operations in support of maritime security operations designed to reassure allies and partners, and preserve the freedom of navigation and the free flow of commerce in the region.  (U.S. Navy photo by Mass Communication Specialist 3rd Class Devin M. Langer)

WASHINGTON– The Navy joins the nation in celebrating the history of African American Sailors and civilians during African-American/Black History Month, Feb. 1-28.

This year’s theme is “African-Americans in Times of War,” which recognizes the contributions African-Americans have made to the nation during times of war from the Revolutionary War to present-day conflicts.

ALNAV 007/18 encourages commands to participate in heritage celebrations and special observances throughout the year that honor the contributions, unique histories and cultures Navy’s diverse Sailor and civilian team.

This month’s observance has its origins in 1915 when historian and author Dr. Carter G. Woodson founded the Association for the Study of Negro Life and History. Dr. Woodson and the association initiated the first Negro History Week in February 1926. Every U.S. president has officially designated the month of February as National African- American/Black History Month since 1976.

“We should celebrate our unique backgrounds because each sailor brings something different to the fight and this makes us a stronger, more lethal team,” said Rear Adm. John Fuller, commander of the Carl Vinson Strike Group and one of Navy’s African American flag officers. The strike group is currently deployed to the Western Pacific.

A breakdown by gender indicates there are currently over 45,000 African-American males and more than 18,000 African American females currently serving in the Navy.

“Those serving today owe our success to the veterans who transformed our Navy into a more diverse force,” said Fuller.

According to the September 2016 “One Navy Team” memo from Chief of Naval Operations Adm. John M. Richardson, actively being inclusive and open to diverse perspectives will produce leaders and teams who learn and adapt to achieve maximum possible performance, and who achieve and maintain high standards, be ready for decisive operations and combat.

Diversity also influences various thoughts, ideas, skill sets, and experiences, which ultimately helps increase the effectiveness of the Navy. Integrating Sailors and civilians from diverse backgrounds enables the Navy to recruit and retain the nation’s top talent from a wide pool of skilled personnel.

The Navy supports minority youth development and encourages the pursuit of careers in science and industry through science, technology, engineering and math (STEM) programs. The Navy also partners with organizations including the National Naval Officers Association, the National Society of Black Engineers, and Historically Black Colleges and Universities (HBCU) in support of African-American service members and civilians.

A complete educational presentation, including a downloadable educational poster on African-American/Black History month, can be requested from the Defense Equal Opportunity Management Institute (DEOMI) by email at [email protected]