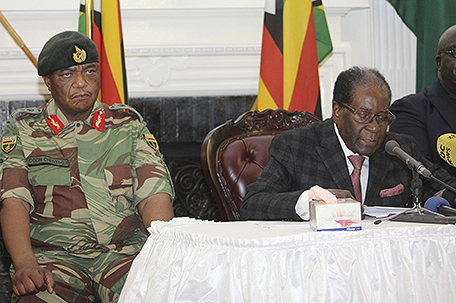 HARARE, Zimbabwe –Zimbabwe’s President Robert Mugabe says he is resigning immediately and voluntarily in order to have a “smooth transfer of power” after 37 years in charge.

The letter was read out in a cheering, dancing Parliament, which had been pursuing impeachment of the 93-year-old Mugabe, the world’s oldest head of state.

The resignation comes at the end of a week of extraordinary events that began with the military moving in last week, angered by Mugabe’s firing of his longtime deputy and the positioning of the unpopular first lady to succeed him.

Impeachment allegations against Mugabe included that he “allowed his wife to usurp constitutional power” and that he is “of advanced age” and too incapacitated to rule.

Although Mugabe’s powers as a wily, ruthless tactician have faded with age, his remarks seemed to reflect a keen understanding of the quandary of those trying to pry him from office: It would be easy enough at this stage to eject him, but perceptions that he is being illegally toppled, or is the target of a military coup, would undermine the credibility of any successor and muddy the international relationships of a new government.

Zimbabwe’s association of war veterans, which is close to the military, said the generals are in an awkward position because their formal role requires them to protect Mugabe from civilian protesters such as those who poured into Harare’s streets on the weekend. It is time for the military to step back and let the parliament and, if necessary, demonstrators remove the longtime leader, said Chris Mutsvangwa, head of the association.

“We cannot continue to have the generals seen as arbiters of the political destiny of Zimbabwe. It is not their purpose,” Mutsvangwa said.

Later Monday, the military said in a statement that it held further meetings with Mugabe since his speech in which he ignored calls to resign. The statement said Mugabe is working toward “a definitive solution and roadmap for the country.”

In a news conference on state-run television, the military said it was encouraged by new developments that include “contact” between Mugabe and ousted Vice President Emmerson Mnangagwa, who has close ties to the military and is poised to succeed him. The military said Mnangagwa will return to Zimbabwe “shortly.”

Zimbabwe’s ruling ZANU-PF party expressed confidence that it could impeach Mugabe this week if it secures the support of opposition lawmakers in reaching a two-thirds majority in parliament. On Sunday, the party’s Central Committee stripped him of his ZANU-PF leadership post in a decision to be ratified at a party congress on Dec. 12-17.

The plan is to move a motion for impeachment on Tuesday, set up a parliamentary committee to investigate the matter, and then refer it to all lawmakers for a vote by Wednesday, said Paul Mangwana, the party’s deputy secretary for legal affair

The main charge against Mugabe is “allowing his wife to usurp government powers” and that “he is too old and cannot even walk without help,” Mangwana told reporters.

However, some analysts believe the impeachment process could take weeks and would, if conducted properly, allow Mugabe to make a case in his defense.

Zimbabwe’s polarizing first lady, Grace Mugabe, had been positioning herself to succeed her husband, leading a party faction that engineered the ouster of Mnangagwa. The prospect of a dynastic succession alarmed the military, which threw its lot in with Mnangagwa by confining Mugabe to his home and targeting what it said were “criminals” around him who were allegedly looting state resources — a reference to associates of his wife.

Zimbabweans are disillusioned by the country’s economic collapse under Mugabe, who acknowledged “a whole range of concerns” about the national disarray on his watch, in his Sunday night address.

He said he planned to preside over the party congress next month, a statement that struck many as either brazen or oblivious because the party is maneuvering to replace Mugabe with Mnangagwa.

But Mugabe is clearly hanging on to his office, as evidenced by the announcement by Mugabe’s chief secretary that a Cabinet meeting will be held at State House on Tuesday morning and said all ministers should attend.

At the University of Zimbabwe, students protested and refused to sit for exams, demanding that Mugabe step down. The spokesman for the Zimbabwe National Students Union, Zivai Mhetu, said they want all universities to close until Mugabe goes.

More protests are expected as the impeachment process unfolds, including some possible attempts to march to Mugabe’s private home in Harare.

Opposition leader Morgan Tsvangirai said he doubts the ability of the ZANU-PF party, buffeted by factional disputes, to solve Zimbabwe’s challenges. The opportunity for a fresh start will be squandered if an “all-stakeholders’” meeting doesn’t take place soon, Tsvangirai said on his party’s website.

He said ongoing confusion in Zimbabwe could undermine such an opportunity after moves by the military and others against Mugabe.

“It would be inimical to progress and the future of the country if all this action was about power retention at all costs,” Tsvangirai said.

Emmerson Mnangagwa to take power in Zimbabwe after Mugabe resignation

After 37 years, rule of Zimbabwe’s Mugabe appears to be over