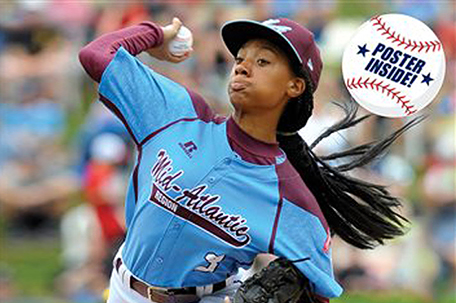 When Harper Collins announced last year that is was publishing a memoir of a 13-year old girl, there were some – many in fact – who questioned why. How could someone that young rate a memoir?

Well, because the 13-year old girl in question:

Has a fastball clocked at 70 miles an hour.

Was the first girl – ever – to pitch a shut-out Little League World Series game.

But if all of that weren’t enough to make her a role model, and worthy of admiration and even adulation, when a college baseball player was thrown out of school team for calling her a “slut” on Twitter, she responded by contacting his school and saying that she hoped he could be reinstated.

The level of maturity this young girl had displayed is remarkable – almost to the point of disbelief. Almost, because in the short time that this teenage girl has been in the national limelight she has shown that she is not only a role model for girls and young athletes, but for the entire community.

Written with Philadelphia author Hilary Beard (who also co-wrote a book with the tennis sensations Venus and Serena Williams), the book details how Mo’ne first started seriously participating in sports. She was 7-years old, and out playing football with her cousin and some of his friends when she was spotted by Steve Bandura, program director for the Marian Anderson Recreation Center in South Philadelphia.

Impressed with the way she threw the football in perfect spirals and making tackles, Bandura wrote his name and telephone number on a piece of paper and told Mo’ne to have her mother, Lakeisha McLean, give him a call.

Her mother didn’t like the idea of Mo’ne playing on an all-boy basketball team at first, but finally gave in.

“It turns out that my mom wasn’t exactly thrilled about me playing what she saw as an aggressive sport. When I was a baby, she thought that I would become a girlie girl — the kind who would like dressing up, and getting her hair braided and curled, and playing with dolls,” Mo’ne explained in her book. “But I wasn’t that girl. My mom says whenever she would buy me a doll, I would just look at her like she was crazy.”

Bandura became one of her biggest fans and supporters, and was instrumental in Mo’ne transferring to the Springside Chestnut Hill Academy, a pricey private school known for its academic excellence. There Mo’ne not only played basketball, but also soccer and baseball – while maintaining grades good enough to make the honor roll.

It was in August 2014 that Mo’ne reached national acclaim. That’s when the 5’4” teenager – with long legs, swinging braids, and a sizzling fastball – became the first girl to win a game in the Little League World Series.

But what was so endearing was her humility.

“I don’t really like all the attention because it feels like everything is about me, and they don’t see the whole picture of my teammates,” she told ESPN after the game. “And without my teammates, I don’t think we’d be here right now.”

Her humility and poise were on display at her book signing last Saturday at the Barnes and Noble according to Mary Beth Carroll, the store’s event manager, who said it was the largest book signing the store has had in at least eight years – perhaps ever.

“Mo’ne was not in the least pretentious, even though there were more than 1,500 people there to meet her, as well as Mayor Nutter,” said Carroll, who added that more than 700 books were sold that afternoon.

“She was extremely poised and professional, and it was hard remembering she’s only 14-years old,” Carroll said. “And she was very, very kind.”

Earlier this month, Disney announced that plans are in the works to produce a movie about Mo’ne, bringing haters out in force, including Joey Casselberry, a junior at Bloomsburg University in Bloomsburg, Pennsylvania.

On March 20th, Casselberry, a first baseman for the Bloomsburg team, tweeted:

Disney is making a movie about Mo’ne Davis? WHAT A JOKE. That slut got rocked by Nevada.

The following evening Casselberry tweeted an apology and deactivated his account, but the insulting tweet had already gone viral. Saturday night Bloomsburg University announced that Casselberry was off the team.

Fourteen is a difficult age for any girl, and to have such a sexually explosive insult hurled at her by someone she didn’t know – and for no reason – of course hurt. By instead of Mo’ne going toe-for-toe with him like some teenagers would do, especially knowing that the nation was behind her, Mo’ne emailed the university asking that Casselberry be reinstated.

“While I admit I was pretty hurt when I read [Casselberry’s] comments,” she wrote, “I felt sad that he was dismissed from the team. As many people know, my dream is to play college basketball and maybe even professionally. I know how much hard work and dedication it will take to get there, and to have that dream taken away would be heartbreaking. I am sure Joey Casselberry has worked very hard to get where he is and dreams of playing in the major leagues. For this reason, I’m asking you to please allow him back on the team so that he can continue to chase his dream. He made one dumb mistake. I’m sure he would go back and change it if he could. We all make mistakes and deserve to be forgiven. I hope you will give him a second chance and allow him to play.”

So, Mr. Joey Casselberry, perhaps you now know why Mo’ne Davis is deserving of all the accolades heaped up on her, including book and a movie. She’s not only a first-rate athlete, but she’s a classy and compassionate human being who can even forgive someone like you.

And if you write to this newspaper, we’d be glad to send you a copy of “Mo’ne Davis – Remember My Name: From First Pitch to Game Changer.”

It’s obvious there are quite a bit of things you can learn from her.