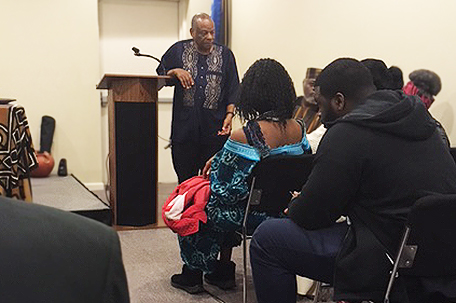 The Molefi Kete Asante Institute has consistently drawn a full house to its Sunday evening lecture series as part of its Winter/Spring 2017 series. This was certainly the case when Dr. Furuq Iman presented “The African American Psychological Condition: Getting Us Healed.” This was followed by the lecture, “People Power: What Happened to the People of African Ancestry: A Community Discussion” with Dr. Saddiki Che’Baye.

Both lectures took place at the MKA Institute, Philadelphia’s premiere African American think-tank, at 5535 Germantown Ave. on Sunday, Feb. 19.  Named for its founder, Dr. Molefi K. Asante, it brings together the grassroots communities in Northwest Philadelphia with other neighbors to interact with Afrocentric scholars, authors, and students. Asante is also the founder of Temple University’s department of Africology, the first program in the country to offer a doctoral degree in Afrocentricity. He continues to be a professor in the department.

“We are so excited that we are now consistently having every seat filled here,” Asante said. “We also livestream at times. We are having such a great response to these programs. It shows that there is a need for them and people are finding that they are informative and useful for them.”

In his lecture Iman stressed how oppression traumatizes the spirit, the mind and the physical body. While his emphasis was on how enslavement and the subsequent continuation of racism and White supremacy affecting African- Americans, he also pointed to other oppressed people. These included the Native Americans by the Europeans, as well as ethnic groups within Europe — the British oppression of the Irish.

“There is psychological oppression, where the victims are subjected to miseducation and no education, false religious images and doctrine, and snit-self media images,” Iman said. He pointed to the fact that bleaching cream is used wherever White supremacy is upheld. This does not only include African- Americans.

“The bleaching cream is used globally,” Iman said. “You go to China and Japan and they are using it. The first time I went to Ghana, they had it in every bathroom. There is power in suppression and self-hatred. That is why skin lightening is a $10 billion business.”

To counter the miseducation, Iman shared excerpts the poem, “Lord, Why Did You Make ME Black?” by poet RuNett Ebo Gray of Germantown. Gray has called this 1994 work “one of the most boot-legged poems” because in the early days of the internet it was sent all over the word. The poem received spontaneous applause from the MKA crowd. 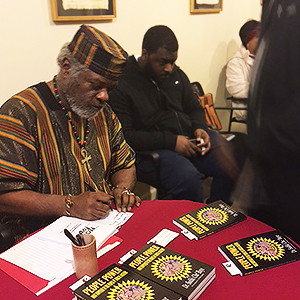 Iman also discussed Post Traumatic Slave Syndrome. He said that this was a multigenerational trauma that changed the DNA. He said the trauma continues. “When there is an absence of opportunity to access the benefits available in the society, it leads to this PTSS syndrome and all its negative manifestations,” Iman said.

Also housed in the MKA Institute is the headquarters for Afrocentricity International. Dr. Ama Mazama is the preaat of the international organization. Each year, the group gathers for their annual conference at various locations throughout the African Diaspora. Mazama was featured at the MKA Institute earlier this year. Her topic was “A Radical African Discourse on Overcoming Cognitive Hiatus.” This was presented to a standing room only on Sunday, Feb. 5.

“Consciousness precedes unity,” Mazama said. She then listed the five phases of African consciousness. They were skin recognition, environmental recognition, personality awareness, interest concern and then African awareness. Mazama contended that most get stuck at the fourth level of interest awareness.

Mazama then gave examples of those with cognitive dissonance. Among them were a Senegalese scholar who when giving a tribute to African women said that he was honoring the mother of former President Barack Obama because she gave birth to a great Black leader. 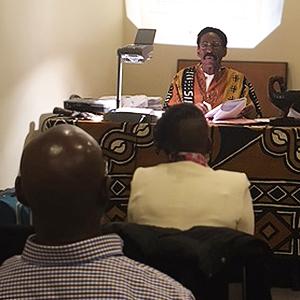 “Cognitive hiatus unavoidably leads to the expression of contradictory statements and/or actions,” Mazama said. “Contradiction is a combination of mutually exclusive statements, ideas or actions.” She then pointed to quotes from scholars like Carter Woodson and Marcus Garvey that showed how one could move towards cognitive consonance.

DNA expert Dena M. Chasten-Ellis said that hearing Iman and Che’Baye was refreshing. It was her first time at the institute. “I am always learning even when I do not (subscribe) to everything. I know that many others control who they say we are, so it is important for us to know our history,” she said.

“There is power in information,” said Damita Groomes, a New York native who lives in Germantown. “We then learn the power to be who we truly are and what we are truly capable of. So, I found many important points here tonight.”

David Draper, a Germantown native, concurred. He said that one of the reasons African-Americans are in their current predicament is that they do not know who they are. “We need to return to that sense of self and that starts with self-education. I found a commonality in both the lectures and that was we have the strength to motivate ourselves to learn who we are,” he said.

The MKA Institute will continue its Winter/Spring Calendar with more lectures and community programs. They will feature “Challenges to African American Safety” on March 5 and “Criminals and Criminal Behavior” on March 19, both at 4 PM. The presenters will be Dr. Michael Tillotson and attorney Michael Coard, respectively.

For a complete schedule visit www.mkainstitute.com.