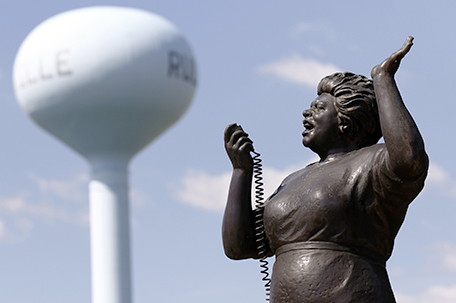 ABOVE PHOTO:  A looming statue of Fannie Lou Hamer is displayed prominently in the Fannie Lou Hamer Memorial Garden in Ruleville, Miss., Thursday, Oct. 5, 2017, as a tribute honoring the civil rights activist. Hamer was a sharecropper who was beaten for registering other African-Americans to vote during the Jim Crow era, and gained international attention in 1964 when she testified before the credentials committee at the Democratic National Convention, as she and others challenged the sitting of an all-white delegation from Mississippi. A centennial celebration marking her birth is planned for Friday. (AP Photo/Rogelio V. Solis)

JACKSON, Miss.–Mississippi-born civil rights activist Fannie Lou Hamer was commemorated last Friday on what would have been her 100th birthday.

Community gatherings were held in her hometown of Ruleville, where a larger-than-life statue of her was dedicated in a memorial garden several years ago. The small city in Sunflower County is about 110 miles (180 km) north of Jackson.

Hamer, who was 59 when she died of cancer in 1977, was famous for saying she was “sick and tired of being sick and tired’’ of the abuse that African-Americans suffered in the segregated South.

She was fired from the plantation where she worked as a sharecropper in 1962 because she and a few other black Mississippians registered to vote.

Flonzie Brown Wright was a young civil rights activist in 1964 when she met Hamer, who was a generation older and was known for advocating equal rights even when doing so put her own life in peril.

In 1964, Hamer was part of the integrated Mississippi Freedom Democratic Party group that challenged seating of the all-White Mississippi delegation at the Democratic National Convention in Atlantic City, New Jersey.

“Because of her thunderous voice and the passion in her eyes, she was chosen to speak before the credentialing committee,’’ BrownWright, who was an aide to another prominent Freedom Democrat, said Thursday.

In a televised appearance that drew international attention, Hamer told the committee that she and other Black women were returning from citizenship training in the South Carolina in 1963 when they were pulled off a bus in Winona, Mississippi, and taken into a jail. She said a White highway patrolman told her, “`We are going to make you wish you was dead,’’’ and then White officers ordered Black inmates to beat her. 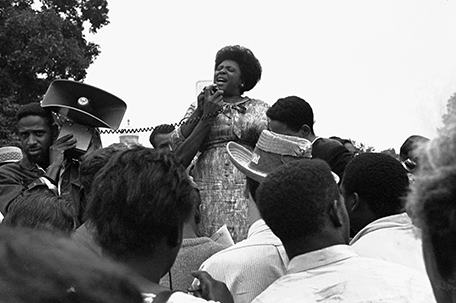 In this Sept. 17, 1965 file photo, Fannie Lou Hamer, of Ruleville, Miss., speaks to Mississippi Freedom Democratic Party sympathizers outside the Capitol in Washington after the House of Representatives rejected a challenger to the 1964 election of five Mississippi representatives. Historically, black women have been no strangers to the quest for social change. But historians say they have often been overshadowed, first by white women during the suffragette movement and then by the black men who were lionized during the civil rights movement. (AP Photo/William J. Smith, File)

“All of this is on account of we want to register, to become first-class citizens,’’ Hamer said. “And if the Freedom Democratic Party is not seated now, I question America. Is this America, the land of the free and the home of the brave, where we have to sleep with our telephones off the hooks because our lives be threatened daily, because we want to live as decent human beings, in America?’’

Other White delegations from the South threatened to leave if the regular Mississippi delegation was unseated. Freedom Democrats rejected what they considered an inadequate offer of two nonvoting seats at the convention.

Mississippi sent integrated delegations to later Democratic conventions. Brown Wright said she sees a direct connection between the work done by Hamer and other Freedom Democrats and the election of Barack Obama in 2008 as the first black president of the United States.

Some in the Mississippi Delta remember Hamer for practical ways she helped improve their lives.

Carl Watson, a 58-year-old Ruleville resident, was the second-youngest of 11 children and said that until he was 12 years old, his family lived on a cotton farm in two shacks, one for his mother and the girls and one for his father and the boys. In about 1972, Hamer and her husband, Perry “Pap’’ Hamer, helped the Watsons find a better home in Ruleville.

Carl Watson said it was the first time his family had a house with running water and indoor plumbing: “We moved to heaven.’’