Mandela mourned as inspiration in many struggles 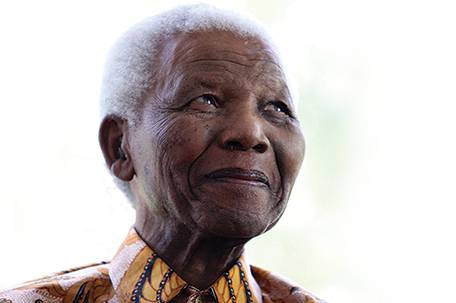 Nelson Mandela led black South Africans in their struggle to throw off the yoke of white rule and then helped the entire nation heal the wounds of racial division.

But his message of perseverance, respect and forgiveness didn’t just heal South Africa. He also inspired people in countries far and wide in their fights against authoritarian rule.

The measure of his influence was in the varied and immediate outpouring Friday from people around the globe in response to his death. In South Africa, people held his image in the streets, but they did so in the Palestinian territories as well. South Africans lowered their flags to half-staff, but so, too, did Europeans and Americans.

Several African countries declared three days of mourning, and traders on the floor of the New York Stock Exchange stood quiet for a minute before the market opened. New York Mayor Michael Bloomberg declared that a Brooklyn high school will be renamed The Nelson Mandela School for Social Justice.

As leaders and citizens, athletes and artists remembered Mandela, many struggled to find words big enough to describe the man who changed the face of South Africa and inspired a continent and a world: a colossus, a father figure, a giant baobab tree providing shade for an entire nation.

Many noted that Mandela’s legacy would not go with him. It would live on, for example, in the freedom of the Eastern bloc countries and the example he set for other African ones.

“He no longer belongs to us. He belongs to the ages,” said President Barack Obama.

As a summit on peace and security in Africa opened in Paris, many leaders vowed to live up to the model he set, but his legacy is also an uncomfortable one for other leaders on a continent where many cling to power and amass riches while their populations suffer.

In Gambia, for instance, intellectuals and public servants quietly wondered if the death of the South African icon would serve as a wakeup call to President Yahya Jammeh, who has ruled his West African nation with an iron fist, accused of imprisoning, torturing and killing his opponents, including journalists. Jammeh has yet to comment on Mandela’s death.

In Haiti, a Caribbean nation that became the world’s first black republic in 1804 through a successful slave revolt, Mandela symbolized the struggle for black equality.

“Mandela is not only the father of democracy in South Africa, but is also a symbol of democracy,” said Haitian President Michel Martelly. “And like any symbol, he is not dead. He is present in all of us and guides us by his lifestyle, his courage and faith in the true struggle for equality.”

“When he could leave prison after 27 years of suffering, that coincided with the fall of communism in our part of the world, thus Mandela became a moral compass, a source of inspiration not only in South Africa but in our region, too,” Hungarian President Janos Ader said in a letter addressed to his South African counterpart, Jacob Zuma.

“All people who fought for freedom in the 20th century, including the Poles, understand what this great man meant to Africa and for the whole world.”

Prime Minister Manmohan Singh of India compared Mandela to his country’s own icon for the struggle for freedom, independence leader Mohandas K. Gandhi.

“A giant among men has passed away. This is as much India’s loss as South Africa’s. He was a true Gandhian. His life and work will remain a source of eternal inspiration for generations to come.”

Palestinians have pinned photos of Mandela on Israel’s separation barrier to draw a parallel between his struggle against apartheid and theirs against Israeli occupation.

Several dozen demonstrators marched from the West Bank village of Bilin to the nearby barrier Friday, chanting “Mandela, Mandela” and pinning 20 photos of the former South African leader to the wire mesh fence.

Malala Yousafzai, the Pakistani schoolgirl who was shot in the head by the Taliban and now campaigns for girls’ right to education, paid tribute to Mandela, whom she called “my leader.”

“Nelson Mandela is physically separated from us, but his soul and spirit will never die,” Yousafzai said in a statement.

A MAN WHO LED BY EXAMPLE

“God was so good to us in South Africa by giving us Nelson Mandela to be our president at a crucial moment in our history,” Archbishop Desmond Tutu said. “He inspired us to walk the path of forgiveness and reconciliation, and so South Africa did not go up in flames.”

“He transformed hate into love, putting his country and people back together,” Ivory Coast President Alassane Ouattara told French TV.

“He is comparable to a great baobab, this invincible tree under which everyone shelters. And when this baobab falls, we find ourselves exposed,” said Guinea President Alpha Conde.

Model Naomi Campbell said: “He was much more than just a figurehead to me — he was my mentor, my honorary grandfather, my Tata. Since meeting him in 1993, he’s guided me and gave me a reason for being in the tough times of my life. He changed my perception of the world.”

South African Foreign Minister Maite Mashabane told the summit in Paris that Africans must work together to achieve peace and fulfill Mandela’s vision.

“We will do so, if we work together to find a peaceful resolution so that our people can continue to put peace, security and development together in the name of our father, who chose no revenge, who said South Africa belongs to all living in it, irrespective of color or creed, who made the impossible possible.”

Hollande said that Mandela’s spirit would preside over the summit.

“Nelson Mandela was convinced that it is not hatred and revenge that make the world better, but reconciliation and political change — and that is how he lived,” German Chancellor Angela Merkel told reporters in Berlin. “That is why he is a giant of history, a statesman with a message that is valid in every country and at every time.”

Robert Mugabe, whose wasted Zimbabwe is often held up as the counterpoint to Mandela’s multiracial, prosperous South Africa, has yet to comment on Mandela’s death. Mugabe recently criticized Mandela for being too conciliatory to whites.

But Zimbabwe’s opposition hailed him as an icon.

“Africa should continue to produce more Mandelas who think more about the people than personal power; for whom the people’s welfare is more important than the selfish pursuit of personal power and glory,” said opposition leader Morgan Tsvangirai.

Speaking under condition of anonymity, a top official at the Gambian Civil Service, who could not be named for fear of reprisal, said President Jammeh should emulate the leadership qualities that Mandela had shown.

“Our president should be the first person to reflect on Mandela’s legacy,” he said.