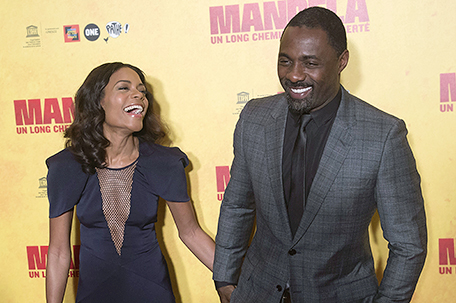 ABOVE PHOTO: British actors Naomie Harris, left, and Idris Elba pose during a photocall prior to a screening of the film Mandela: Long Walk to Freedom at the UNESCO headquarters in Paris, Monday, Dec. 2, 2013.

The film, Long Walk to Freedom, has already earned $427,000 (Rand 4.4 million), according to Videovision Entertainment.

The movie stars British actor Idris Elba as Mandela, the 95-year-old liberation struggle icon. It’s based on his autobiography with the same title.

The British-South African co-production opened just over a week ago in South Africa, followed by a limited engagement in New York and Los Angeles.

“I visited a few cinemas over the weekend and experienced the emotional response to the film with audiences leaving the cinemas completely satisfied,” said
producer Anant Singh. “For me as a filmmaker, this is really fulfilling.”

The movie traces Mandela’s life from his childhood in a remote rural part of South Africa, through his years struggling against apartheid, to his 27 years
imprisonment and his election as the country’s first black president in 1994.

The release comes amid renewed concern about Mandela’s health. Family members told the South African Broadcasting Corporation this week that he is
continuing to put up a courageous fight from his “death bed.”

“He is still with us although he is not doing well in bed,” his grandson, Ndaba Mandela, told the interviewer.