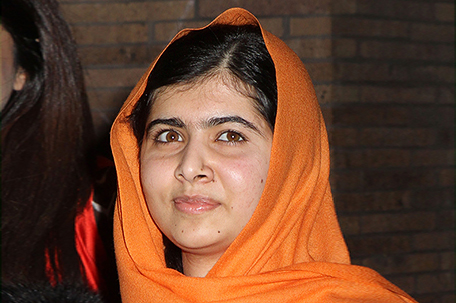 ABUJA, NIGERIA—Nigeria’s president promised Pakistani education activist Malala Yousafzai that he would meet with the parents of some of the 219 schoolgirls held by Islamic extremists for three months, she said Monday.

Malala is celebrating her 17th birthday in Nigeria in an effort to work for the release of the girls from Boko Haram.

She appealed directly to their captors as she held hands with some of the girls who escaped.

Yousafzai added: “You are misusing the name of Islam … Islam is a religion of peace.”

Boko Haram attacks continued over the weekend with witnesses blaming them for the bombing of a major bridge on a northeast Nigerian highway that further limits access to its base camps in the Sambisa Forest, where some of the kidnapped girls are believed to be held captive.

Gunmen destroyed most of the bridge on the road between Maiduguri and Biu on Saturday night, making it impossible for vehicles to cross, the spokesman for the Nigerian Vigilante Group, Abbas Gava, told The Associated Press.

Malala, who escaped a Taliban assassination attempt in 2012, met with Nigeria’s President Goodluck Jonathan Monday and told reporters afterward that “he promised me that the girls will be returned as soon as possible.”

She described an emotional meeting Sunday with some of the parents of the girls.

“I could see tears in their eyes. They were hopeless. But they seem to have this hope in their hearts … and they were asking that: Is it possible that they could meet the president.”

She is hopeful that the meeting, and the release of the girls, will happen “really soon,” she said.

Jonathan has not met with any of the parents, though some regularly make the dangerous drive from Chibok to join activists who have held rallies daily in Abuja since April 28.

“My birthday wish this year is ‘Bring Back Our Girls’ now and alive,” she said, using the social media slogan that has been picked up around the world to demand freedom for the girls kidnapped from a school in the remote northeast Nigerian town of Chibok before dawn on April 15.