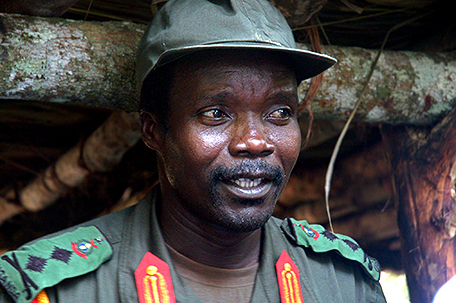 UNITED NATIONS — African troops searching for Lord’s Resistance Army leader Joseph Kony are concentrating on the Central African Republic although the notorious rebel commander indicted for war crimes keeps moving in and out of Sudan, South Sudan and Congo as well because he knows he’s being tracked, a U.N. envoy said Monday.

Abou Moussa, the U.N. special representative for Central Africa, told reporters after briefing the Security Council that he thinks the capture of Kony is “coming pretty soon the way we are going.”

Last month, African troops captured a LRA lieutenant known as Charles Okello and rescued about 10 civilians, including seven children, who had been abducted by the rebels. In February, Uganda’s military said Okot Odhiambo — who was the LRA’s No.2 commander behind Kony — likely died after an attack late last year in Central African Republic, known by its initials CAR.

A presidential statement approved by all 15 council members took note of Secretary-General Ban Ki-moon’s latest report which said senior LRA leaders are believed to be based in northeastern CAR. It said “credible sources” indicated that Kony and senior commanders recently returned to seek safe havens in Sudanese-controlled areas of the disputed Kafia Kingi enclave on the border between CAR, South Sudan and Sudan.

Moussa said Kony may have been seen in Kafia Kingi but his method of operation is to spend today there, and go to South Sudan or elsewhere tomorrow, and keep on the move because “we have troops who are tracking him on a daily basis.”

He added that he had spoken to Sudan’s U.N. ambassador who said “they are not harboring Kony” and that Kafia Kingi “is no-man’s land.”

The LRA, which originated in Uganda in the 1980s as a popular tribal uprising against the government, has waged one of Africa’s longest and most brutal rebellions. Its fighters are accused by the U.N. and human rights groups of cutting off the tongues and lips of innocent civilians and kidnapping thousands of children, forcing them to be soldiers and sex slaves.

In 2005, Kony became the first suspect to be indicted by the International Criminal Court on charges of war crimes and crimes against humanity.

Military pressure forced the LRA out of Uganda in 2005, and the rebels scattered across parts of central Africa. The LRA insurgency and the Ugandan government’s response have left at least 100,000 people dead, and the Security Council said in 2011 that more than 440,000 people across the region have been displaced.

Kony became well known to the international community in 2012 when an American-based advocacy group, Invisible Children, produced a video seen by nearly 100 million people on YouTube that described atrocities committed by the LRA.

Moussa stressed the parallels between Boko Haram, which kidnapped nearly 300 Nigerian schoolgirls a month ago, and Kony, who abducted children, and in the early years maimed and poured acid on schoolgirls.

While LRA activities have decreased, the rebel group remains active.

According to the U.N. humanitarian office, 65 presumed LRA attacks were reported in the first quarter of 2014 in CAR and Congo, resulting in 93 abductions and two deaths. This was a significant decrease in deaths compared with the first quarters of 2012 and 2013.

The Security Council welcomed the African Union’s recent stepped-up operations against the LRA, which it said have increased pressure on the rebels’ command structure and resulted in several significant defections. The African troops are backed by U.S. military advisers, whose contingent recently doubled to 250.

At the same time, the council expressed concern at insecurity in conflict-torn South Sudan and Central African Republic and the impact of fighting in both countries on operations against the LRA.

Ban’s report said senior LRA leaders are believed to be based in northeastern CAR, “exploiting the country’s current internal instability to regroup.” It’s also suspected that some former Seleka rebels — who overthrew the government in March 2013 and were ousted from power in January — “may be in collusion with the LRA” and providing them with information on operations by the African troops.