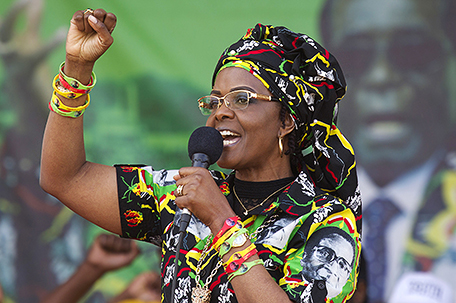 ABOVE PHOTO:  Zimbabwe’s first lady, Grace Mugabe, greets supporters at a rally in Zimbabwe. South Africa’s police minister says the wife of Zimbabwe’s president, background image, has handed herself over to police after being accused of assaulting a young woman Sunday night. (AP Photo/Tsvangirayi Mukwazhi, File)

JOHANNESBURG — A South African model’s claims of assault have drawn attention to Zimbabwe’s increasingly outspoken first lady Grace Mugabe, who has been viewed as a possible successor to her 93-year-old husband. Grace and President Robert Mugabe returned to Zimbabwe Sunday, despite calls by a South African legal group and protesters for the Zimbabwean first lady to be denied diplomatic immunity.

Here’s a look at the wife of the world’s oldest head of state, who has faced assault claims elsewhere in the past:

Twenty-year-old model Gabriella Engels claims that the 52-year-old Grace Mugabe attacked her with an extension cord in a luxury hotel in a Johannesburg suburb a week ago, on August 13.

Engels claims she was in a hotel room with mutual friends of Mugabe’s two sons, who live in Johannesburg, when the first lady burst into the room and assaulted her. Photos posted on social media show a bloody gash to Engels’ forehead that she claims was a result of the encounter.

Mugabe has not commented on the allegations.

“I want to go to court because I really feel like she should go to jail for what she did to me,” Engels told The Associated Press.

Mugabe has been accused of assaults during other overseas trips, including a 2009 visit to Hong Kong in which a photographer accused her of beating him up.

Who Is the First Lady?

The South African-born first lady was plucked by President Robert Mugabe from his secretarial pool decades ago. She bore him children and, after the death of his first wife, Grace and the president married in 1996. Though Grace Mugabe has been lampooned by critics in the past for shopping expeditions and a doctorate obtained under questionable circumstances, she has built a serious if polarizing political profile with charity work and frequent rallies in recent years.

Last month, she challenged her husband publicly for the first time to name a successor, wading into a subject that the president has regarded as taboo. She previously said her husband could rule from the grave. “If God decides to take him, then we would rather field him as a corpse” in the 2018 election, she said early this year.

Robert Mugabe, who has led Zimbabwe since 1980, already has started campaigning for next year’s vote. He has repeatedly said he will not choose a successor.

Where is Grace Mugabe Now?

Grace Mugabe returned to Zimbabwe Sunday morning with her husband, who had attended a regional summit in South Africa.

Zimbabwe’s state-owned broadcaster showed them being greeted at Harare International Airport by government and military officials.

The case has taken on a political flavor. South Africa’s main opposition party had warned President Jacob Zuma and his administration not to let Grace Mugabe leave. And lawyers working with the model said they will go to court to challenge the South African government if it is confirmed that immunity was granted to Mugabe. Willie Spies, legal representative at AfriForum, an organization that primarily represents South Africa’s White Afrikaner minority, said Grace Mugabe may be back in in Zimbabwe, but the legal actions may make it difficult for her to return to South Africa in the future.