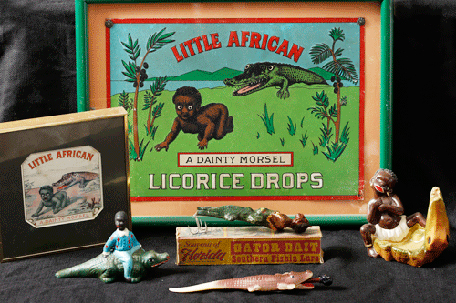 Philosopher and essayist George Santayana is noted for penning the now cliche mantra, “those who cannot remember the past are condemned to repeat it.”  In an era where the political and socio-economic climate is at a bubbling point soon to boil over, these words couldn’t ring out more factually.  While it is easy as African Americans to don our dashikis and primp our Afros a little more carefully every February in celebration of Black History Month, we must remember that our legacy and contributions to this world date back well before we ever stepped foot in this new land, and our treasures spill over into every day whether it happens to be a leap year or not.  Two museum curators fully believe in this message and want to do their part to make sure the next generation knows themselves because ‘when you know better, you do better.’

In the middle of Richmond Street in the Port Richmond neighborhood of Philadelphia, you will find a giant warehouse.  While it doesn’t look like much from the outside, the deep history housed there is next to none in the country.  The Lest We Forget Slavery Museum was founded in 2002 by husband and wife duo J. Justin and Gwen Ragsdale with the vision to “channel the strength and perseverance of African ancestors and exemplify the legacy of their greatness.”  Starting his collection over 50 years ago, Justin Ragsdale was steadfast in his mission to tell the stories of our ancestors who were condemned for doing such.

As a boy, Ragsdale would spend summers in Rockhill, South Carolina with his Uncle Bub.  Fascinated by his uncle’s stories, Ragsdale would often hear him speak fondly of Massa.  With  childlike innocence, Ragsdale had no idea who Massa was, but was curious about his uncle’s safeguarded chest which he never opened for the boy.  Uncle Bub lived to be 109 and upon his death, Ragsdale found the former sharecropper’s home and his locked chest.  When he opened it he discovered a Confederate Army uniform and a unique set of shackles.  He dug deeper and discovered his uncle had been a former slave and made to fight in the Civil War against his freedom. Thus spawned the origin of a massive slave and African memorabilia collection. 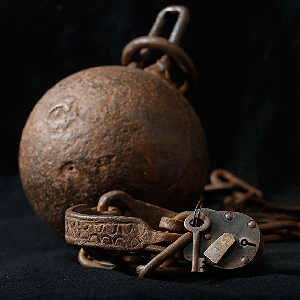 Upon entrance to the museum, you enter into the Orientation Room, where African sculptures, ritual headdresses, Caribbean clothing, vaudeville paraphernalia, and shackles greet you.  Walk through the Orientation Room and pictures and posters line the walls describing the history of slavery well before Europeans influenced what is now known as the Trans-Atlantic slave trade.  Taking about an hour and a half to walk through the museum, the Ragsdales give a final presentation at the end of the tour describing in further detail the turmoil our ancestors suffered to Europe’s gain. Ragsdale even models some of the shackles for dramatic effect.

There are so many unique pieces housed at Lest We Forget, such as one-of-a-kind shackles, koffles and whipping paddles, that the newest Smithsonian National Museum of African- American History and Culture reached out.  They had their eyes on a pair of Uncle Bub’s shackles the couple was not willing to part with. The terms,  “Rule of thumb,” “shake a leg,” “barrel of laughs,” Black church rituals, and Negro spiritual references all found their beginnings in ante- bellum South.  One room shares the harrowing story of lynchings, complete with real nooses and KKK robes with Black blood smeared on the white fabric.

The Lest We Forget Slavery Museum opens your eyes to bondage in all its forms, eras including present day mental oppression featuring a wall of obituaries–victims lost to gun violence by the hands of their own.  Because the Ragsdales primarily do this work on their own, the museum is available to the public by appointment only, but do not let this hinder you from a unique cultural experience.  They also offer a traveling exhibit, lectures, videos and pamphlets that offer more information on the toils of backbreaking labor for profit. Please be encouraged to purchase a membership and live out the fourth principle of the Nguzo Saba –Ujamaa — cooperative economics because it is our duty to keep the Black dollar in circulation to stimulate the growth and education of our communities.  This museum is too precious to perish at the hands of our own.  This should serve as a reminder of who we are and have always been in this world, descendants of greatness, skill and insurmountable strength, lest we forget.