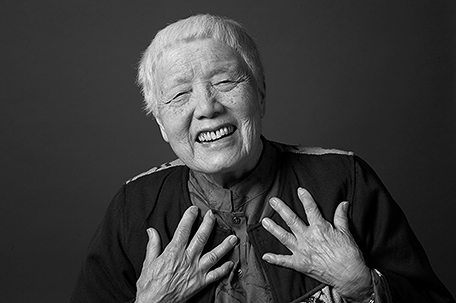 Boggs was born in 1915 to Chinese immigrants and spent over 70 years fighting for social change. According to family, she died peacefully in her sleep on Monday morning in Detroit. Via a statement from Boggs’ trustees, “Grace died as she lived, surrounded by books, politics, people and ideas.”

President Barack Obama released a statement sending prayers to Boggs’ family, stating that he and First Lady Michelle Obama were saddened by her passing.

“Michelle and I were saddened to hear of the passing of author, philosopher, and activist Grace Lee Boggs. Grace dedicated her life to serving and advocating for the rights of others – from her community activism in Detroit, to her leadership in the civil rights movement, to her ideas that challenged us all to lead meaningful lives. As the child of Chinese immigrants and as a woman, Grace learned early on that the world needed changing, and she overcame barriers to do just that. She understood the power of community organizing at its core – the importance of bringing about change and getting people involved to shape their own destiny. Grace’s passion for helping others, and her work to rejuvenate communities that had fallen on hard times spanned her remarkable 100 years of life, and will continue to inspire generations to come.  Our thoughts and prayers are with Grace’s family and friends, and all those who loved her dearly.”

Boggs’ mission to improve race relations in American culture began in the 1930s with activist A. Philip Randolph, one of the prominent leaders in the Civil Rights Movement. Boggs found herself on the opposite end of discrimination when she finished graduate school. After hearing things such as “We don’t hire Orientals,” she started working with Randolph on championing equal rights for minorities.

NPR reports Boggs had been so dedicated to fighting equality for African Americans, her FBI files labeled her as “probably Afro Chinese.”

She would later meet her husband and fellow community activist James Boggs in 1953. The couple brought their love for revolution together by releasing the book “Revolution And Evolution In The Twentieth Century” in 1998, years after James’ passing. Boggs also released the autobiography “Living For Change”; and in 2011, she co-wrote “The Next American Revolution: Sustainable Activism For The Twenty-First Century” with author Scott Kurashige.

The couple went on to organize the Detroit civic organization Save Our Sons And Daughters (SOSAD), Detroiters Working for Environmental Justice, Gardening Angels, and Detroit Summer, a collective of youth leaders from all backgrounds.

Grace Lee went on to speak about the concept of civil rights and self-awareness well into her nineties. Her view on revolution focused on the act and experience of each individual, unlike the aggressive stereotype of overthrowing the government. She also believed in local change by reaching out to communities first to restore moral values.