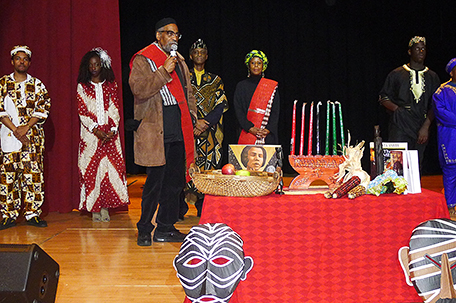 The students of the Universal Audenreid Charter High School celebrated the annual harvest festival with a festive gathering on December 18th.

The Polar Vortex wasn’t enough to keep the community from coming out to participate in the Universal Audenreid Charter High School’s first Kwanzaa pageant on Friday, December 18th.

Featuring entertainment and educational activities based on the Nguzo Saba, or the Seven Principals of Kwanzaa—Umoja, Kujichagulia, Ujima, Ujamaa, Nia, Kuumba and Imani—the pageant, which was co-sponsored by the Philadelphia Community of Leaders, is designed to help students to learn about their heritage while having fun.

The idea behind the pageant is to restore hope in a time of hopelessness, said Queen G Jezarael Bey, pageant organizer. When musical icon and Universal Corporation founder Kenny Gamble approached her about doing this, Bey had an idea of what she wanted to do, she said.

“In our communities the primary objective is to empower our young people with their African heritage so that they can learn of their original greatness,” Bey said. “I wanted to do a rights of passage that reflected strong emphasis on inner beauty. Our primary objective was to enhance inner beauty that they were born with, for them to be able to find love and order from within.”

Gamble spoke to the students, stressing the importance of advocating for themselves and producing their own kingdom stories.

“Congratulations to all of you as we continue to search about our past,” he said. “When we were going to school, they didn’t teach us anything.” 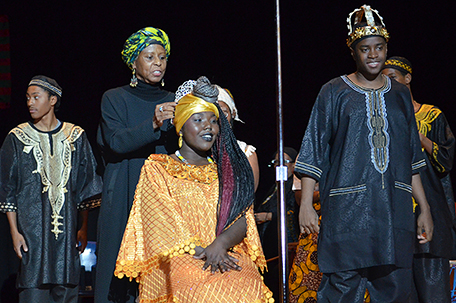 As part of the ceremonies, Robert and Wanda Dickerson—associates of Kwanzaa founder Maulana Karenga, a festival which celebrates its 50th anniversary this year—inducted Gamble and his wife Faatimah into the Royal Village Family Order Establishment of the Universal Kwanzaa Alliance.

The students were also taught about entrepreneurship and vending through a Royal Village Marketplace provided by the Afrakan Independence Day Organizing Committee & Urban Shaman Productions. The Marketplace was part of the larger #BuyBlackPhilly initiative launched by PCOL in November. The initiative includes a downloadable app (www.buyblackapp.net) where area Black businesses can register, or patrons can locate vendors. The metrics gathered throughout the holiday buying season via this app are going to be analyzed, and a long-term solution formulated regarding the success and expansion of these businesses.

“Buy black so they can come back,” Gamble encouraged attendees.

Here are the winners:

The Royal King and Queen received a $1,000 scholarship and took part in a coronation ceremony on Dec. 31, 2016 at Universal Audenreid Charter High School. Legendary poet Sonia Sanchez was part of the ceremony.