Kofi Annan celebrated as first African to lead the U. N., fought for developing world causes 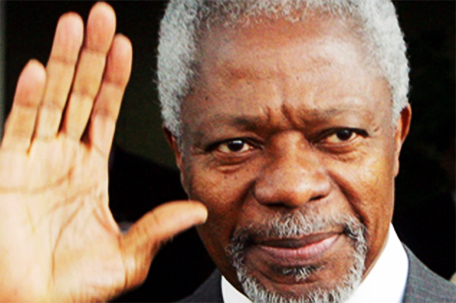 Kofi Atta Annan, former Secretary General of the U.N., is being remembered for his leadership over ten tumultuous years when the world faced a crisis of poverty, injustice and disease. Mr. Annan passed away last month at age 80.

Secretary General Annan, a polished diplomat from Ghana and later the leader of the U.N., was considered a champion of developing world causes but encountered resistance from the U.S.

Mr. Annan saw it as a top priority for the UN to focus constructively on the elimination of poverty in the developing world. He called on rich nations to provide the funding and poor nations to affect the necessary reforms to “make poverty history.”

When the world’s top finance ministers voted to cancel the staggering debt of some developing countries, Annan called it “very encouraging,” adding “This will offer a chance to finally overcome the resource shortfalls that have kept so many millions of people mired in squalor.”

A combination of self-assurance, self-control and unpretentiousness enabled him to make the most of opportunities to act as an honest broker. He was by nature a “diplomat’s diplomat”. But he also stuck to his guns even when powerful UN members urged retreat.

A notable example was his intervention in Baghdad in 1998 to defuse a crisis over UN arms inspections in Iraq, going ahead with negotiations against strong pressure from Washington to stay away; and he spoke out against the US invasion of 2003, deploring the American failure “to solve this problem by collective decision.”

Afterward, he called the invasion “illegal”, infuriating the White House.

In his farewell address at the Truman Library, Annan unleashed his frustration with the U.S. “No nation can make itself secure by seeking supremacy over all others,” he said. World institutions could not accomplish much “when the US remains aloof.”

Of the crises he oversaw, one in particular created deep distress. As undersecretary general for peacekeeping, he received a cable on Jan. 11, 1994, from the UN force commander in Rwanda asking for reinforcements to prevent an impending genocide in which 800,000 mostly Tutsis would be massacred.

A later UN investigation found that Annan failed to act urgently on the request although the U.N. charter prohibits the U.N. from interfering in a nation’s internal affairs. “Guilt” over Rwanda led Annan to back military intervention to stop genocide.

Kofi Annan to step down as Syria envoy