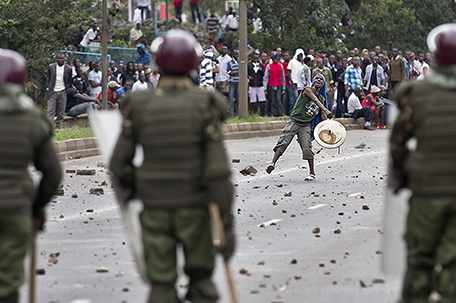 ABOVE PHOTO:  A student carrying a makeshift shield throws rocks at riot police as they engage in running battles on the highway next to Nairobi University’s main campus in downtown Nairobi, Kenya Tuesday, May 20, 2014. Kenyan university students on Tuesday carried out demonstrations over a proposed increase in student fees, but the protests quickly turned into hours of running battles between students throwing rocks and security forces firing tear gas, before riot police chased the students inside their campus and cornered them in a building into which they fired dozens of tear gas grenades and for a while prevented anyone from leaving.  (AP Photo/Ben Curtis)

NAIROBI, KENYA — University students threw rocks at police in Kenya’s capital Tuesday as authorities fired back with tear gas in running battles that didn’t end until police cornered students in a campus building and fired dozens of rounds of tear gas inside, witnesses said.

Students demonstrated in at least four cities across the country over a proposed increase in university fees. But the protest by students from the University of Nairobi, which sits just across the street from the downtown business district, was the most violent.

An Associated Press photographer said that several hours into the back-and-forth exchanges, police chased the students into university classrooms and fired tear gas inside.

Some people tried to leave the gas-filled rooms with their hands up but police chased them back inside, sometimes beating them with batons. Staff members who were caught up in the fray and the students were eventually allowed out.

A police spokesman did not answer a telephone call seeking comment. A police Twitter feed said Tuesday evening that the demonstrations had “largely dissipated and order has been restored.”

One of the demonstrating students, Titus Khaemba, said he was angry that class fees could rise. He noted that terror attacks have been on the rise in recent weeks leading to the evacuation last week of hundreds of British tourists from Kenyan beaches. He said security forces should be concerned with that and not protesting students.

“Right now there is no employment along the coast and the government is not looking into that. They are looking on how to get the money for the next election,” Khaemba said.

Fla. woman doused in gas, set on fire at 7-Eleven