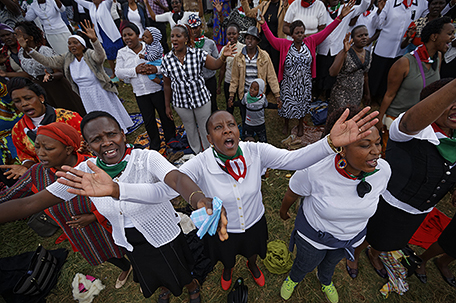 ABOVE PHOTO:  Women pray out loud at an evangelical pre-election prayer rally for peace, in downtown Nairobi, Kenya Sunday, July 30, 2017. Kenyans are due to go to the polls on Aug. 8. to vote in presidential elections after a tightly-fought race between incumbent President Uhuru Kenyatta and main opposition leader Raila Odinga. (AP Photo/Ben Curtis)

Wafula Chebukati helped identify the body of Christopher Msando at the city morgue and said he had injuries to the neck and head. Mssando had been reported missing a few days ago.

“This is a brutal murder of our employee and we are demanding to know who killed him and why,” Chebukati said. “We are demanding government provide security to all IEBC (electoral commission) staff.”

A special team from the Directorate of Criminal investigations had been set up to investigate Msando’s murder, said police chief Joseph Boinnet.

“We view this incident as a crime of grave proportions,” said Boinnet.

Msando had been in charge of managing information technology systems at the electoral commission. Kenya will be using biometric technology to identify voters and electronic transmission of results, which reduces the chances of fraud.

Msando had publicly sought to reassure voters that the election results would not be tampered with. Chebukati said they have postponed a test run of the technology scheduled for Monday because Msando was crucial in the process.

The main opposition group has charged that President Uhuru Kenyatta wants to rig the elections, an accusation the presidency has denied. The National Super Alliance called Msando’s death an assassination and an attempt to disrupt the elections.

The U.S. and U.K. diplomats in Kenya said they are gravely concerned about Msando’s death and offered the Kenyan government assistance to investigate the death.

Msando was found dead a day after police killed an intruder at Deputy President William Ruto’s home after an 18-hour siege. Police said the intruder had attacked a guard at the gate with a machete and taken his gun, which he used to kill another police guard.

Analysts have warned that further violence could accompany the hotly contested Aug. 8 vote in which Kenyatta is running again.

Kenyan elections have turned violent in the past, notably after the 2007 presidential vote that international observers said was flawed. More than 1,000 people died.

The stakes are high for the candidates this time, said Murithi Mutiga, a senior analyst with the International Crisis Group.

“Kenyatta, a scion of one of the most prominent political families in the country, does not want to make history as the first Kenyan president not to achieve re-election. His rival, Raila Odinga, son of Kenya’s first vice president, is probably making his last serious attempt at capturing the presidency,” Mutiga said. “None of them can afford to lose.”

In addition, the electoral commission is relatively new and has faced multiple challenges in preparing for the vote, Mutiga said.

Another concern is the threat from the al-Shabab extremist group based in neighboring Somalia. The group recently threatened to disrupt Kenya’s election and has carried out more than 100 attacks inside the country since 2011 in retribution for Kenya sending troops to Somalia to fight it.

Former U.S. marine and security analyst Andrew Franklin says there is concern Kenyan security agents may be overstretched during the elections, presenting an opportunity for extremists to strike.