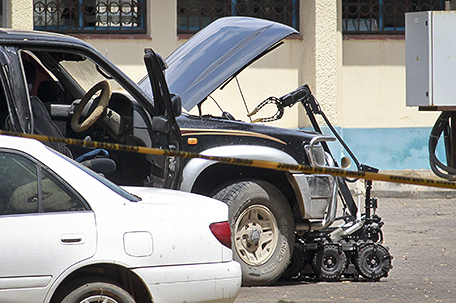 ABOVE PHOTO:  A remotely-controlled robot of the Kenya Defense Forces (KDF) examines a suspect vehicle in the Changamwe area of Mombasa, Kenya Tuesday, March 18, 2014. Kenyan authorities say police have intercepted a car with improvised explosive devices, foiling a planned terrorist attack in the coastal city of Mombasa, and that officers from the Anti-Terrorism Police Unit had arrested two men who were in the car.  (AP Photo)

NAIROBI, Kenya — Kenyan authorities made more than 650 arrests following the latest bomb attack Monday in the East African country, according to officials who are worried that a wave of small-scale bomb and gunfire attacks indicates a large-scale terrorist assault may be imminent.

The country is still on edge following the attack by Somali militants in September on Nairobi’s Westgate Mall that killed at least 67 people. Since then al-Shabab sympathizers have been blamed for an explosion at Nairobi’s main airport, a grenade attack on tourists on Kenya’s coast, a blast on a public bus in Nairobi, and three blasts Monday night in the capital that killed six people.

Authorities said Tuesday they had arrested 657 people following the latest attack. Kenya frequently makes mass arrests after attacks only to release nearly all of those arrested.

Last month, police on the coast discovered a car bomb packed with explosives that a police official has said was meant to target a shopping mall. Later in the month gunmen killed six people in a church outside Mombasa.

Australia said over the weekend that officials have received reports that terrorists are planning a range of attacks in Nairobi and Mombasa.

“The attack on the Westgate Mall in 2013 and a series of incidents and attacks in 2014 underscores that there is a serious and ongoing risk of large scale acts of terrorism in these locations,” Australia’s government said. “Kenyan authorities are at a high state of alert.”

A senior Kenyan security official said that security agencies believe a large scale attack is imminent. He said because police foiled the planned car bomb in Mombasa, terrorists are more determined to carry out another.

Bryan N. Kahumbura, a Horn of Africa analyst with the International Crisis group, said a mix of issues is fueling the escalation of attacks.

The disappearances and executions of Muslim youth suspected of having links to terror networks have caused a lot of anger within the Kenyan Muslim community, Kahumbura said. Many Muslims feel they are being profiled by police, he said.

Al-Shabab has threatened more attacks in Kenya unless the government withdraws troops fighting the al-Qaida-linked group in Somalia.